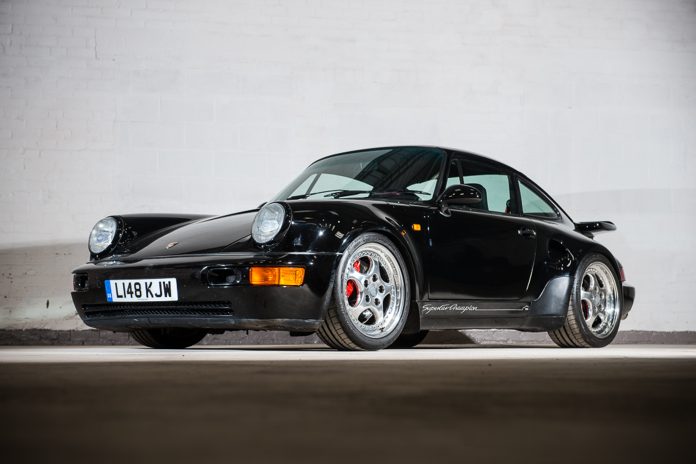 Once again, a rare, classic Porsche is being offered for sale, this time it’s a 1993 911, which is to go under the Silverstone Auctions’ hammer. Offered for auction at the May sale taking place on the 13th at Silverstone Circuit, this is not any mere 911 though, this is a Tuebo S Leichtbau.

This specific model, finished in black, is model number 51 of a batch of just 86 made. Sitting insistently at the rear is a 3.3 litre turbo engine mated to a 5-speed gearbox, but that’s not all this car is about. Its lighter than the standard model of its time, thanks to thinner glass, aluminium doors and a kevlar boot and spoiler. Even the carpets have been made thinner in the pursuit for extra performance.

As well as being lighter, it also packs a bigger punch as its received 61 more bhp, bringing the total power output to 381bhp. There are also visual enhancements such as the side air intakes in front of the rear wheels, which also draw in more air to help cool the big brakes. Step inside the the Leichtbau and you’ll find a black leather interior with triple tone Rubystone Recaro seats and steering wheel.

Throughout its lifetime it has covered 68,868km (or 42792 in Queen’s English), so it’s without a doubt a low mileage model. It’s also bound to be a rather pricey one, as the estimate for this rare German is staggering £475,000 to £575,000 – yikes! The car comes fitted with an immobiliser, two keys, full service history, as well as a 230 point check and a fresh MOT.

What Does Silverstone Auctions Think?

“The Leichtbau is one of the most exciting 911s available with unique rarity and stunning looks,” explains Harry Whale, classic car specialist, Silverstone Auctions.Being 40 millimetres lower, 180kg lighter and with an additional 61 horse power, the Leichtbau is uber powerful and a very exciting proposition for Porsche enthusiasts.

“The car presents in very good condition with a very well preserved, clean and tidy interior, mostly original paintwork of a good standard and mechanically all components under the car are outstanding for a car of this age,” concludes Harry.