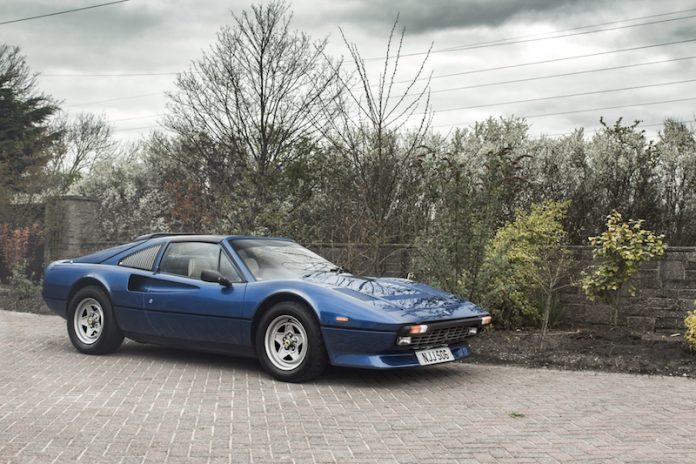 I’ve often written about a classic Ferrari that’s either on sale or going to auction, and most of the time I’ve most likely mentioned it’s rare. Well I’m afraid I’m going to say it once more, but when you bear in mind, this particular 308 is believed to be one of just 4, I’m sure you’ll forgive me.

If you are a Ferrari purist, you will know that when the 308 entered Ferrari’s stable back in 1975, it came fitted with a V8 engine. This model however, finished in Metallic Blue Chiaro, does not have a V8. As you may have guessed by the title, it has had a V12 squeezed in to it. More specifically, it’s Ferrari’s 400 4.8 litre, 4-cam V12 that was the brainchild of Nigel Hudson, who at the time was working at Nigel Mansell’s Ferrari main dealership network, Emblem Sports Cars.

As well as the 4.8 litre V12, this 308 has factory-fitted options such as a deep front spoiler and air conditioning, so you’ll feel as cool as you look. The car is to be auctioned by Silverstone Auctions at its May sale, it will hold an estimate between £50,000 and £60,000. I don’t know about you, but that’s not quite as much as I was expecting.

Commenting on the car, sales manager at Silverstone Auctions, Will Smith, said: “The results from the creation of this car are quite astonishing. The 4.8 litre, 4-cam, Ferrari V12 is known affectionately as ‘Nigel’s Flyer’ and must be seen to be fully appreciated. It is something very special indeed.”