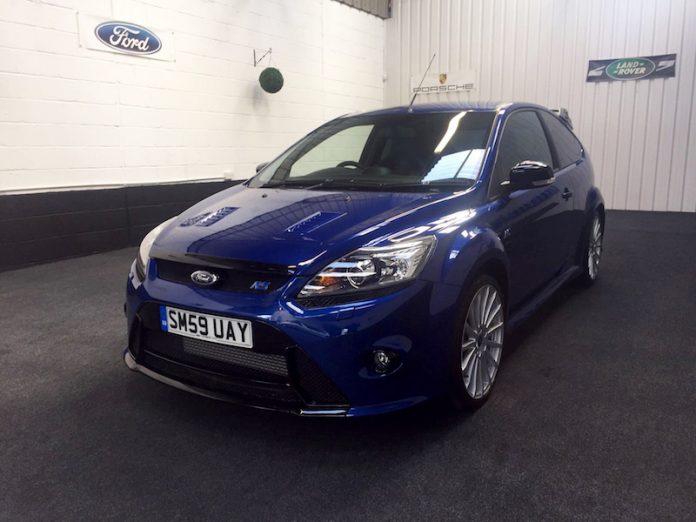 Earlier I brought you news of the new Abarth Trofeo, now it’s time for another hot hatch. It’s not a new one one, but as you’ll soon find out, it’s practically new. Offered for auction by Classic Car Auctions next sale on the 1st and 2nd of April, this Mk2 Ford Focus RS has covered just 45 miles. No, I haven’t missed any zeros off – this car has done less than a 100 miles.

The current Ford Focus RS has been a revelation since its release and although I’ve never driven one, it’s a car I long for. I cannot remember the last time I’ve wanted to own a car so badly. Anyway, before I drift off in to a wistful rant, let’s get back to the Mk2. Finished in Performance Blue, this ‘almost-new’ Focus RS has had one service, which was last year and the current MOT is valid until October. It’s powered by a 2.5 litre 5-cylinder engine, which produces 300bhp and 400Nm of torque. This means a 0-60 time 5.7 seconds and a top speed of 163mph, which is still fast by today standards.

That’s not too far behind the stats of today’s Focus RS, but because the Mk2 – and the Mk1 for that matter – have gained such a cult status you’ll actually be paying out more for this model. The current Focus RS will set you back around £31,000, but this pristine Mk2 has an estimate of £32,000-£36,000. If I had the money… Actually cancel that, my heart still lies with the Mk3…

“The MK2 Focus RS has all the makings of a future classic and indeed are proving popular at auction. Back in February our sister company Silverstone Auctions offered an Ultimate Green example with just 1,800 miles which sold for an amazing £41,063 including buyer’s premium,” comments Guy Lees-Milne, general manager and classic car specialist at CCA.

“With the launch of a new Focus RS to much fanfare and continued demand for all things Fast Ford we expect a similar amount of interest with this amazingly low mileage example,” added Guy.