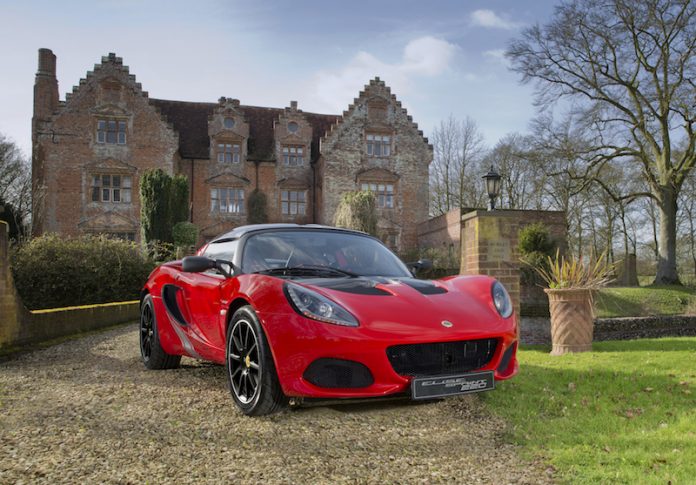 Lotus is famed for offering light cars, but the new Elise Sprint is lighter still. A total of 41kg has been saved in the new model, meaning it tips the scales at a featherweight 798kg. The weight saving is thanks to shaving off kilos here and there, with both interior and exterior aspects lightened.

The Elise Goes On A Diet

Making a car lighter isn’t simply just cutting bits off, it has to be done cleverly. The weight savings in areas will not be massive, but they all add up. For example, the carbon race seats save 6kg, the new battery has saved 9kg and the lightweight alloy wheels save 5kg. Carbon fibre has also been used in the savage effort to keep the weight down. Helping to power this slimmer of the month is a choice of either a naturally aspirated 1.6 petrol unit or a supercharged 1.8 litre petrol. Both engines will be mated to a manual gearbox, which quite satisfyingly, features an open-gate setup. Not only does this look super cool, but it also saves 1kg. You know what they, every little helps. This engine will also be mounted to an exhaust system, which Lotus claims makes the four-cylinder engine the best sounding on the market. That is a very bold claim by the Norfolk-based brand.

The new Elise has revised front and rear styling, plus it features bespoke ‘Sprint’ badges. There’s a subtle stripe down the side and the cabin features accent colours to match the exterior. The cabin can also be trimmed with alcantara, but that’s an optional extra. There is a newly designed centre console plus a driver display that has been made clearer to read, making a better proposition as an everyday car.

Speaking of creature comforts, iPod connectivity and Bluetooth can also be specified as an optional extra. Just remember though, that not only will this add more cost, but it will also add more weight. So all that work by the Lotus engineers would have been for nothing, so think about that when you’ve had a big breakfast! As this is a Lotus, you can bet your bottom dollar it’ll know its way around a race track – or a decent B road for that matter. Features such as double wishbone suspension help the car corner flatter than athlete’s stomach and there are brakes from AP Racing and Brembo for when your talent runs out.

If you happen to have a fair bit of talent, then you may want to play about with the Elise’s ESP modes, of which there are three. Drive, for everyday use, Sport, for when things get a bit lively, and finally Off, for when you want to go all-out. The Elise Sprint should be able to deliver some decent fun, that’s for sure.