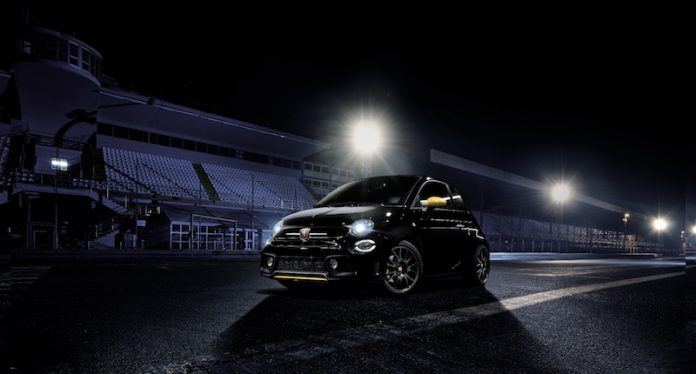 The Abarth 595 may not be the hottest hatch going, plus its ‘FIAT 500’ image is difficult to shrug off, but I do rather like it. I drove the 696 Biposto last year and it was certainly an experience. In fact, I’m still seeing the chiropractor following the cars harsh ride. It’s good fun though, but I’m not sure how Seen Through Glass can have one as a daily.

That may not sound overly potent, but let’s not forget it’s only a little car, so 0-62 is dealt with in about 7 seconds. Carry on though, and you’ll hit a top speed getting on for 140mph. You’ll sound pretty good as you do it, as the Trofeo comes fitted with a Record Monza exhaust. Other exterior features include 17″ matt black alloys, which will look good with any of the five body colour choices. These are: Abarth Red, Gara White, Campovolo Grey, Record Grey or Scorpione Black, which can be teamed with yellow, black or red wing mirrors. A rather cool feature is the Uconnect system, which is home to the usual mod cons such as DAB radio and smartphone integration. It’s also home to Abarth telemetry, which is able to a load European race tracks and time you as you go around them in real-time.

“The new Trofeo is a novel and exciting idea for the 595 range,” says Gerry Southerington, brand manager, Abarth UK. “The extra standard equipment means it’s excellent value for money, while the technology such as the telemetry, makes it an ideal choice for customers who want to test their car’s performance on a racetrack. It’s a winning combination.”