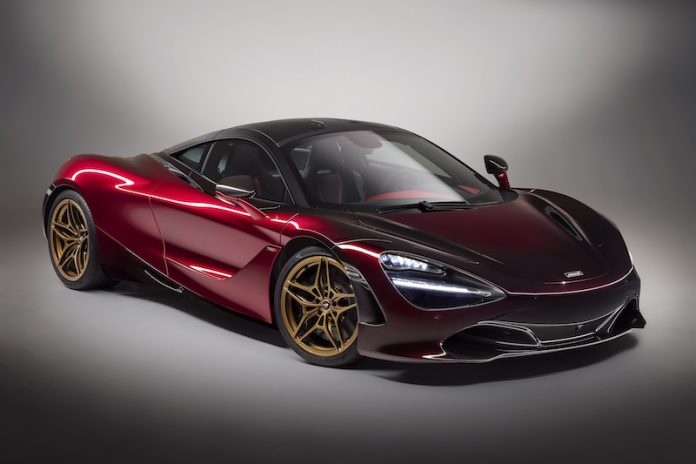 The McLaren 720S has certainly been one of my standouts from the Geneva Motor Show, but it’s already been bettered. Just 24 hours after the ‘standard’ model was unveiled, the new 720S by MSO has been revealed. This car should come with a warning, because this is pure filth. It’s a good thing I’m writing this after the watershed, that’s for sure. Right, let me compose myself so I can tell you what this new model has.

This model is also known as the 720S ‘Velocity’ and that refers to the visually stunning paintwork. Look closely and you will notice it has two shades. No, that’s not clever lighting, it’s actually two different colours. Up front and on top you have Nerello Red and on the sides and the rear you’ll find a lighter, more vivid Volcano Red. This faded look is finished off with lightweight alloys finished in metallic bronze.

I’m sorry, I need another moment to compose myself. *one cold shower later* Just when you thought it couldn’t get better, you’ll notice the exposed carbon fibre bonnet, which looks simply spot on and is also finished in red. Like the normal 720S, there is plenty of carbon fibre on both the exterior and interior of the 720S MSO. As I’m on the topic of the interior, inside you will find alcantara seats with a splash of Harissa Red. This same colour features throughout most of the cabin to really put the cherry of the cake.

So you may be wondering how much all this red loveliness is, right? Well it’s rather pricey, bearing in mind the standard 720S starts under £210,000. Well take that figure and add around £115,000 to it. This means you will be emptying your bank account of £335,000. Not only is it expensive, but because it’s the motoring equivalent of a dirty magazine, you will need to drive it around in a brown paper bag. I may have made that last part up…