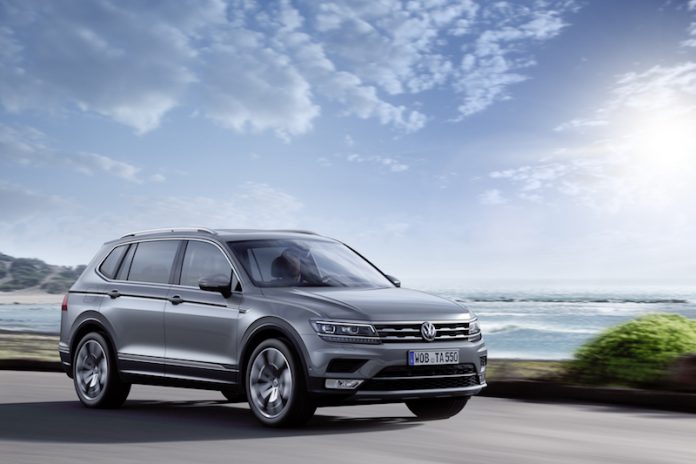 A while I wrote a short but sweet article about some sketches German carmaker had released for its new Tiguan Allspace model. This week though, full details have been released for the Tiguan’s bigger brother, but what does it have?

The Clue’s In The Name

Space, and plenty of it. Based on the new Tiguan, the Allspace features a longer wheel base than the standard model, which of course means extra space. Five seats come as standard in the new model but buyers will be able to take advantage of an optional third row if required. Whether you go for five or seven seats there will be a sizeable boot which has a capacity of up to 1,920 litres. The Allspace looks pretty sharp but don’t it’s all show and no go. Like the normal Tiguan the Allspace can be selected with either a front end designed for normal road use or one for off-road use, which features further underbody protection. The smooth roofline has been ditched in favour of a grooved design, which VW says pays homage to classic SUVs – the Suzuki Jimny I’ve recently been testing for example.

The Tiguan Allspace will come with a choice of six engines when it goes on sale – three petrols and three diesels. The base model comes with the 148bhp TSI petrol, but the range also has the option of a 178bhp or a 218bhp petrol unit. The diesel contingent is made of three units which produce 148bhp, 187bhp or 237bhp. Buyers will be able to choose from either a manual or a DSG automatic box and four-wheel drives comes standard for models producing 178bhp and above. The base model will go on Germany for a price of around €30,000 but UK prices are yet to be announced just yet. The base model ‘Trendline’ will offer features such as a multifunction steering wheel, media system with smartphone connectivity, black roof rails, LED daytime running lights, 17-inch alloy wheels and a variable cargo floor. Step up the trims and you’ll receive full-LED headlights, keyless entry, electric tailgate and climate control.

The new VW Tiguan Allspace will be available to view at the Geneva Motor Show which opens its doors next week.