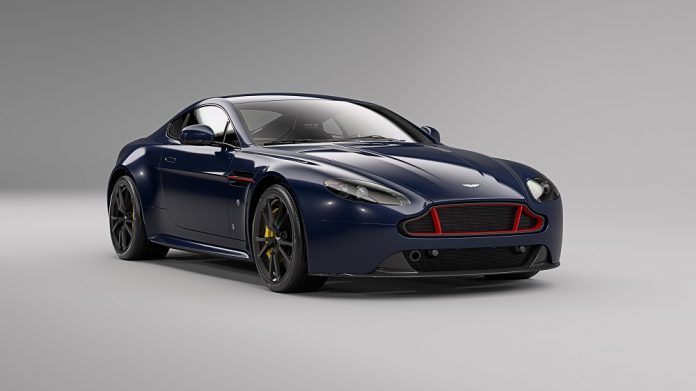 The current generation Vantage feels like it’s been around for ages – in fact I think it’s older than Bruce Forsyth isn’t it? Mind you, I’m not complaining as it still looks as good today as it did when first hit the road in 2005. Yes, it’s had a few styling tweaks here and there over the years, but it has still kept virtually the same desirable shape.

There’s a new model in town though, which has been created by ‘Q by Aston Martin’ to celebrate the partnership between the British carmaker and Red Bull Racing. It’s not quite as special as the AM RB 001, but it could still make for a nice little collector’s item. Available on both the V8 and V12 Vantage, the Red Bull special editions won’t give any extra power, but instead provides some unique styling elements.

The first thing you will notice is the richly deep Mariana Blue finish which comes as standard on the stylish coupe. If that isn’t quite your cup of tea, then you can either opt for the optional shades of Tungsten Silver or a satin Mariana Blue. Also part of the package is a racing-inspired carbon fibre splitter and diffuser as well a grille and ‘Red Bull Racing’ branded side strakes, also finished in carbon fibre. The exterior is completed with a red trim on the grille and yellow brake calipers.

The inside will present the familiar cabin we have become accustomed to with Aston Martin, but a trained eye will notice changes such as sports seats with ‘Red Bull Racing’ embroidery plus carbon fibre inlays and a colour-coded steering wheel with a 12 o’clock accent stripe. For ultimate exclusivity, customers can choose their final inspection plaques to be signed by either Daniel Ricciardo or Max Verstappen.

Aston Martin President & CEO, Dr. Andy Palmer said, “Motorsport is and will always be a key part of Aston Martin’s DNA and both the V8 and V12 Vantage S Red Bull Racing Editions bring that ethos straight to our customers. With the 2017 FIA Formula 1 World Championship® set to begin soon, I hope that the purchase of these models will bring the racing season that little bit closer for those lucky few customers who can’t wait for it to begin”.