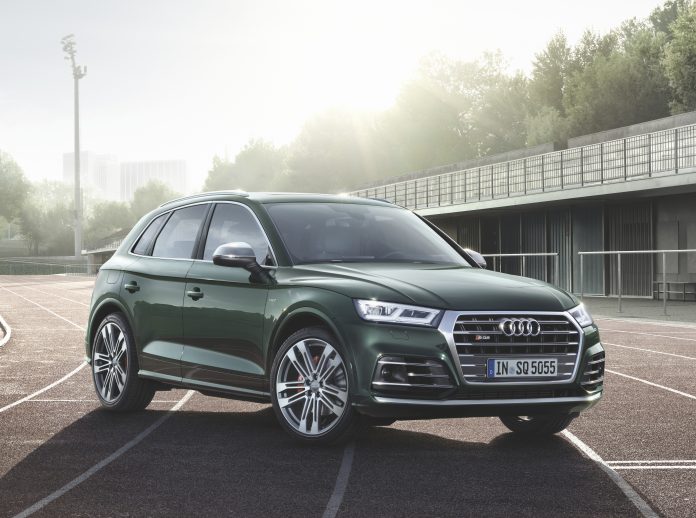 The Audi SQ5 saw its debut at the North American International Auto Show last year and now it’s available to order with prices starting from £51,200. What will that price tag get you though?

Putting the ‘Sport’ in SUV

Let’s face it, most sport utility vehicles aren’t really that sporty. The closest they get to sport is to perhaps ferry around some sporting equipment. The SQ5 is able to live up to its SUV name, mainly thanks to the new 3.0 litre TFSI V6 engine which produces 340bhp and 500Nm of torque. Mated to an 8-speed tiptronic automatic gearbox and quattro four-wheel drive, the SQ5 is able to hit 62mph in just 5.4 seconds. Pretty impressive I’m sure you’ll agree.

The SQ5 is also efficient with how it delivers it power though – the higher gears have a long ratio for better fuel economy and the car is able to freewheel at speeds between 34mph and 99mph as soon as the driver’s foot comes off the throttle. On the other side of the coin, the lower gears have a shorter ratio to help with acceleration. The V6 engine will have less weight to lug about too as the new SQ5 is 35kg lighter than the outgoing model thanks to a new body architecture. This means a combined fuel economy figure of 34mpg and CO2 emissions that come in at 189g/km. Ok so it won’t give a Toyota Prius any problems, but it’s nice to know you can spend more time enjoying the V6 rather than having to supply it with more fuel.

As this is an S model, you can expect aggressive styling both inside and out, including contoured bumpers, Nappa leather clad sports seats and a steering wheel with a satisfyingly flat bottom. The SQ5 also features Audi Drive Select as well as adaptive continuous damping control to give you a choice of either a comfortable ride or a dynamic one. Aluminium sports pedals and inlays in the cabin help to round off the design.

The SQ5 is available to order now and will compete with rivals such as the Porsche Macan, the Range Rover Sport SVR and the BMW X5 M.