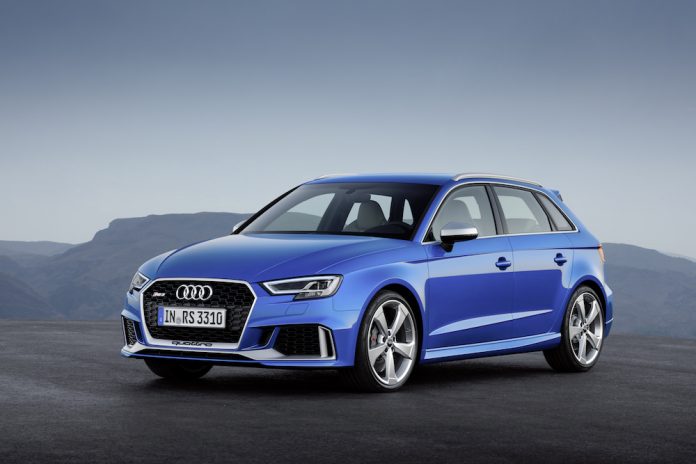 On the back of the new RS3 Saloon that has been revealed, Audi has now released details for the Sportback version which to put it simply, is flipping fast.

Like the TT RS, the RS3 Sportback is fitted with the 2.5 litre five-cylinder petrol engine which produces a muscular 400PS. In horsepower terms that’s 395, which I’m sure you’ll agree is plenty, particularly in a car such as this. As you can probably imagine, the 0-62mph is very quick and in fact it’s dealt with in just 4.1 seconds thanks to 480Nm torque figure. The car offers 33PS most than the previous version and it’s also 26kg lighter, meaning there’s slightly less weight to lug about. The top speed is limited to 155mph, although an optional dynamic package will increase the speed to 174mph. This bundle of power is mated to a 7-speed S-tronic automatic gearbox which is dual-clutch and helps to distribute the power between the axles.

It’s clear that the new RS3 is rather spicy but hopefully even the most clumsy driver should be able to make use of its performance without finding themselves in the nearest lampost. Audi’s quattro four-wheel drive system is in place in the new RS3 Sportback plus it’s been made wider to give better stance on the road and as you’d expect sports suspension has been installed as well. Adaptive damper control is also present and allows the driver to choose from three different modes- auto, normal and dynamic. Other sporty features include 19-inch alloy wheels which sit within beautifully flared arches and a body that sits 25mm lower than the standard A3. LED headlights are to be found at the front with an appropriately shouty exhaust system at the rear. Step inside and you will be greeted by a typically Germanic finished cabin with plenty of tech, plus a lap timer, which is something to brag about down the pub.

Also typical with any German car such as tthis, there is tech and there is a fair amount of it to be found. The new RS3 Sportback comes with the Audi Connect system which is home to features such as full smartphone integration, DAB radio, navigation and so forth, but there are also features such as Wi-Fi hotspot and you can even connect your phone to the cars antenna (not literally of course) for better signal. Other highlights of the specification include a 705 watt Bang & Olufsen sounds system, plus there will be an array of safety systems such as traffic jam assist and cross traffic assist rear. Prices for both the RS3 Saloon and Sportback are yet to be announced but both cars will be available in the UK from the summer and they will also feature at the Geneva Motor Show.