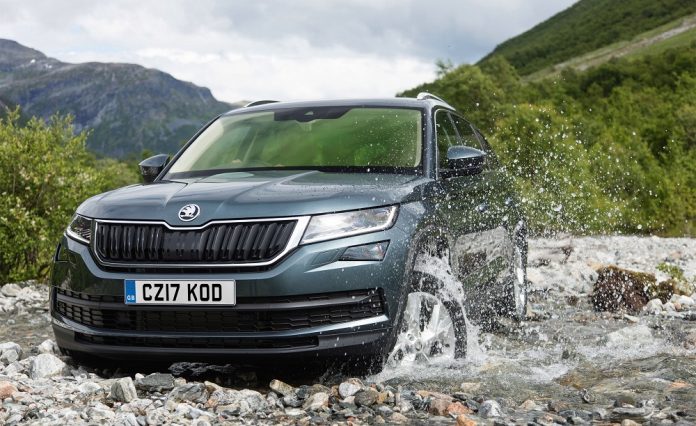 Skoda has been teasing us for quite some time with its new Kodiaq but prices and more details have finally been announced by the Czech brand.

So without further ado, let me get on to the part you want to know most – how much? Well prices start from £21,495 which makes it cheaper than rivals such as the Nissan X-Trail, Kia Sorento and Hyundai Santa Fe. So that’s the price covered, let’s have a look at which trims bring you what equipment.

The new Kodiaq will be available to order from next month and there will be plenty of choice for buyers with no less than 24 different variants in the new model range. The base level S which may be the runt of the litter but that’s not to say you’ll go wanting. LED daytime running lights, 17″ alloy wheels, leather multifunction steering wheel and air conditioning are on offer at a price starting from £21,495. ​​Pay £1,450 more and you’ll get the SE model which has the same as the S but adds bigger alloy wheels, sunset glass (I’m assuming that means tinted), cruise control and rear parking sensors. There is then a noticeable step in price (£28,595) for the SE L model which adds seven seats, powered tailgate, 19″ alloys and sat nav.

That’s not all though, the SE L model also provides alacantara coated seats, the front of which are heated, plus there is Drive Mode Select and full LED headlights. If that isn’t enough you can opt for the range-topping Edition model which is priced at £30,695. This also includes 19″ wheels, powered tailgate and seven seats but the seats are now finished in leather instead. Metallic paint and chrome roof rails also come as standard.

What provides the power?

The 2.0 TDI comes with a choice of three power outputs to give plenty of flexibility – 113bhp, 148bhp and 187bhp are offered by the diesel unit. Gearboxes include a 6-speed manual, a 6-speed DSG and also a 7-speed DSG, all of which can be used with four-wheel drive depending on the engine and trim selected.