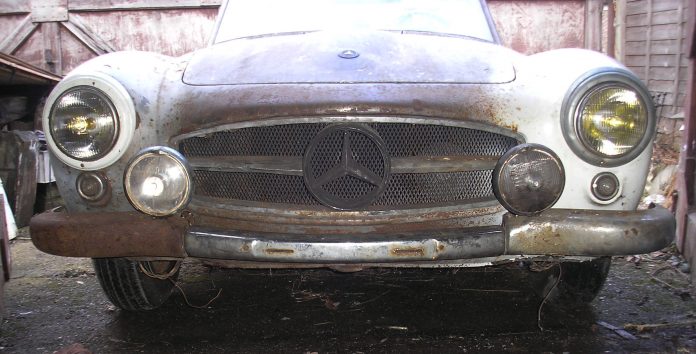 The Mercedes 190SL is perhaps one of the most elegant cars ever made, even to this day. Made in the 50s, the 190SL had the same elegant curves to be found on the legendary gull-wing 300SL, a true style icon. Sadly though, this 1957 190SL has seen better days and in truth it looks rather sorry for itself.

No, in fact what Barons will be offering at its first auction of the year is a a tatty example, which is a perfect restoration project. Funnily enough, the car was bought for this very purpose in the 70s, but for whatever reason it was put in to storage and has barely been touched for the last 40 years or so. However, it’s said that the engine has been turned over from time to time and despite its external condition, the car is a runner. The estimate for this SL in need of TLC is between £37,000-£45,000, which is bound to attract some budding restorer.

Plenty More Where That Came From

If that’s not what you’re after either then there will also be a strong choice of Italian classics such as the Alfa Romeo Spider, as well as some British GT cars in the form of the Aston Martin DB7. There will also be a highly original 1956 Vauxhall Cresta E which is believed to be have been part of British embassy fleet of vehicles in Paris. With just 31,000 miles on the clock the Cresta E has been valued at £6,000-£8,000.

For more details of the auction head to the Barons website.