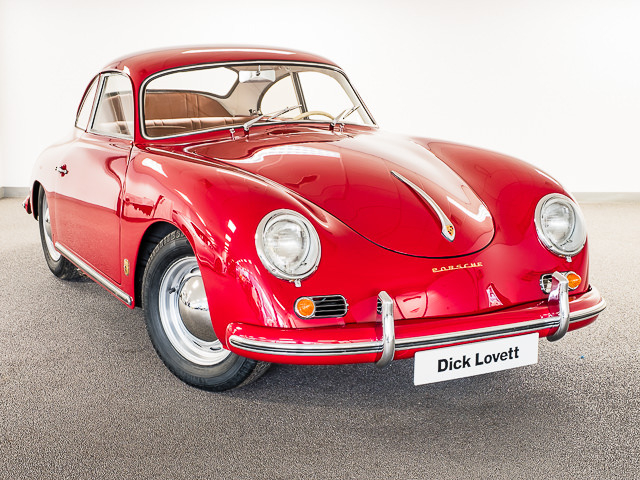 It’s been quite some time since I indulged in some Weekend Window Shopping so let’s get stuck in. It may have been the colour or the beautifully sculpted body that drew me to this wonderful Porsche 356 offered for sale by Dick Lovett.

Now as a general rule, I can take or leave the styling of most Porsches, but it’s different with the 356. Here we have a 1958 example finished in stunning Ruby Red with only 67,544 miles on the clock. But let’s not focus on that, just look at the car, really take it in and it’s well placed details. It’s certainly a thing of beauty.

Porsche Power (Or Lack OF)

However, as this is a Porsche I suppose it would be rude not to talk about the power, although this is not actually the 356’s strong areas. That’s because under the bonnet is a rather piddly 1.6 litre engine, which is mated to a four speed manual. Together, the 356 is able to churn out an almighty… 59bhp. 0-62 comes… eventually and the top speed is a rather sluggish 110mph. So it’s clear this car is for cruising rather than storming down B roads.

As mentioned previously, it’s a great looking motor and a lot of work has gone in to it. In fact this particular model was stripped down to the bare metal as part of a nuts and bolts restoration. The inside was re-trimmed with caramel leather, which looks great with the contrasting red dashboard and the car still holds many of its original parts.

The price for this German beauty? £125,000, which may seem like a lot but as classic Porsches seem to be only going up in value, you could be on to a winner here. Just don’t expect lots of power!

For more details head to Auto Trader or Dick Lovett.