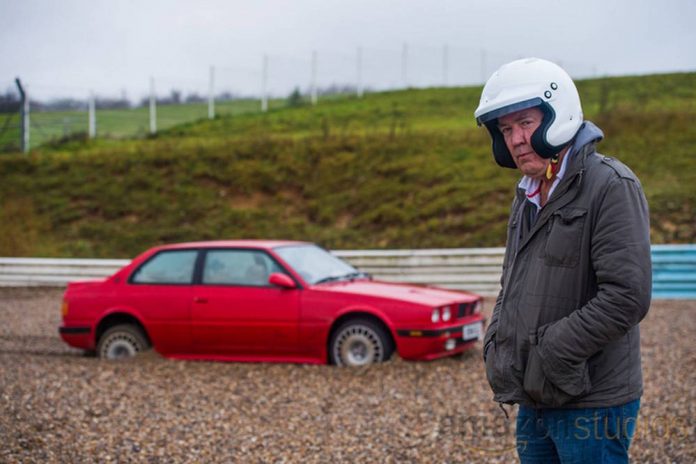 Now if you’ve read my last two articles about The Grand Tour you may remember that I wasn’t overly impressed and I felt both episodes peaked too soon. I’m happy to report that this week’s offering was a bit more like it. But what exactly happened? Well read on you’ll find out.

Hammond Hoons In The 124 Spider

Ah, the 124 Spider. This is a car I have been trying to get off FIAT for quite some time but I’m yet to beat them in to submission. My dismal failure aside though, Richard Hammond was lucky enough to slip behind the wheel of the aforementioned car as he hooned about the Eboladrome. However, it was the standard FIAT model he had to play with though – he had the Abarth version, with its black model and limited slip diff.

Like the last two episodes, the review was polished and well delivered, although I suppose it would be foolish to expect anything else from the trio as don’t forget they are bonafide motoring journalists beneath their laddish outer shells. It was interesting to what the Hamster made of the Abarth model compared to the MX-5, the car which the FIAT/Abarth 124 is based on. So far, so good.

And On That Bombshell…

Yes, I know – Clarkson doesn’t say that anymore. However, in this week’s Conversation Street segment Richard and James declared themselves as vegetarians. What?! Is nothing sacred anymore?! In fairness they still eat chicken so I suppose they doesn’t make them vegetarians, despite May’s somewhat warped argument that chickens are actually vegetables. May also declared that leather is useless as a choice of material for car seats pointing out that it’s either too hot or too cold.

To a degree I agree with him – when I get in my MX-5 on cold mornings I’m convinced I will eventually get piles. However, they are a lot easier to clean that cloth seats and they just look better. Especially when that are in a black/blue combo to make the rest of the cars theme in the case of the MX-5. The rest of Conversation Street provided good banter from the three as per usual, as did the main film for this week’s Loch Ness-based show.

One thing I loved about the last era of Top Gear was the cheap car challenges and up until now, we’ve not seen those kind of challenges emulated in The Grand Tour. Until today that is – the trio were given the task of getting a used Maserati for £8,000, which seems optimistic on paper but all three managed to do it in albeit very similar models. This was a point Jeremy was quick to point out when he compared his very bold Biturbo to Richard’s rather ugly 430.

May turned up in an equally ugly Maserati, only this time it was a convertible but more importantly, an auto. The reason for this became self apparent when Captain Slow try to clamber out of the ageing Italian car to reveal a broken arm. This kick started a good flow of banter throughout the film, which involved a predicable (but still enjoyable) knob gag (watch out for that) as well some other interesting things fitted to the steering wheel of May’s Maserati including something I’d class as ‘prickly’.

It was a good film which provided plenty of laughs and it was good to see Clarkson, Hammond and May doing a show all about cars again but I was hoping for some challenges within the challenge on which the three can use as a guide to which is the best using a points system. Yes, there was a drag race against a small Suzuki hatchback but this seemed a tad pointless as it was clear that the Maserati would win. There was a challenge towards the end where they had to race back from the north of France back to the UK, with third place having to sell their car. The ending wasn’t what I was expecting, let me tell you that…