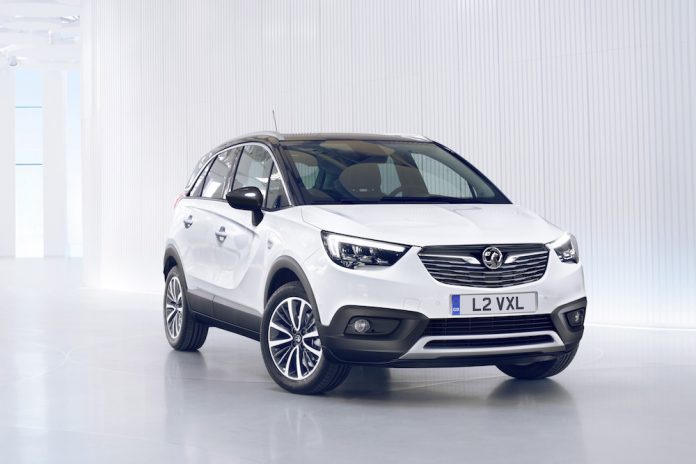 Sometime ago Vauxhall teased us with the new Crossland X and at the time it seemed rather intriguing. The time has come for Vauxhall to reveal the new crossover model and whilst I don’t particularly care for the grille, it looks like this could be a good seller for the brand.

The new vehicle will sit below the Mokka in Vauxhall’s X SUV range and although it may be rather small, it offers a good deal of space inside. In fact Vauxhall described the inside of the car as ‘tardies-like’ – does that mean there will lots of flashing lights and controls you don’t know how to use? Anyway, Doctor Who analogies aside, let’s focus on the car’s dimensions. The Crossland X has a length of just 4.21 metres long, making it 10cm shorter in length than the Astra hatchback. Despite this, the Crossland X will offer the biggest boot in class, with at least 410 litres to play with. The rear seats can slide backward and forward by up to 15cm, which can either increase the boot to 520 litres, or to give those in the rear more legroom. If that still isn’t enough though you can fold down the rear 60/40 seats to gain 1,255 litres of luggage space.

Big on space, big on tech

As well as being spacious and comfortable – the seats are AGR-certified don’t you know – the Crossland X will also be able to offer buyers a fair bit of tech for their money, including Vauxhall’s OnStar system, which comes standard on all trim levels. A 180-degree panoramic rear view camera has also been deployed on the new model as well an 8″ colour touchscreen, full smartphone integration with Apple CarPlay and Android Auto, wireless phone charging and the same Wi-Fi hotspot system used in the Mokka X, which can connect up to 7 devices to the interweb. Safety hasn’t been forgotten about either; this is another area where the Crossland X should do well. Features such as lane departure warning, blind spot alert, speed sign recognition, AEB and advanced park assist will be on hand for buyers should they need them. Keyless entry, LED lighting and a heated steering wheel will also feature in the Crossland X.

How much? When can I buy one?

The finer details such as engines are gearboxes are yet to be announced at this stage. Prices have also not been confirmed as yet but Vauxhall has confirmed the new SUV will hit showrooms in the summer where it will do battle with cars such as the Renault Captur and the Peugeot 2008.