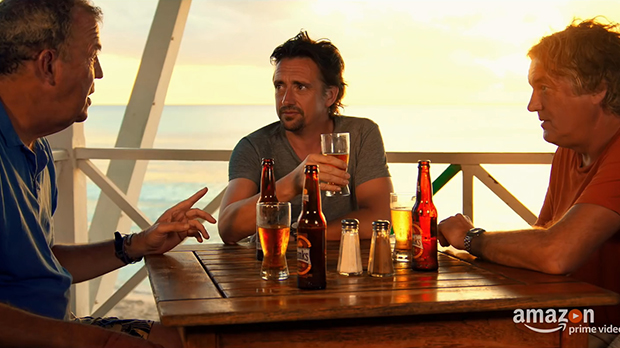 Good evening everyone! I can’t believe we are getting towards the end of the first season of The Grand Tour and my word it has been a wild ride! However, I wasn’t overly impressed with last week’s offering and I’m afraid to say it was the same story with this week’s episode.

Clarkson, Hammond and May hit the States once more, this in Nashville, and the show got off to a good start with Jezza driving in about in the new Alfa Romeo Giulia. This was of particular interest to me as the Giulia was one of the most exciting new cars for me in 2016. I’m still hoping I will get to test one although God knows when that will be. ​​The Giulia Clarkson had its disposal was the almost unpronounceable Quadrifoglio, a car fitted with a turbocharged V6 engine which produces more power than the BMW M3, its main rival. The car looked rather splendid and the Welsh backdrop wasn’t too bad either. I thought this was shaping up to be more of a car show than last week – there was even an alert towards the start of the show reminding the three it was a car show – but the rest of the show seemed a tad aimless.

Up The Creek Without A Paddle

The main film this week took place in the cold, miserable place that is Barbados – wait, no that’s not right is it? Anyway, on to the task; the trio were employed with the task of building a coral reef to replace the ones that are dying out because of the environment. The plan was to drop five car body shells in to the gorgeous clear blue seas of the Caribbean sea.

​​I will concede that this two-part film did give me a few laughs but like last week’s show, I felt like they were trying to fill time rather than bring something meaningful car content. I know the trio have become more about entertainment that proper hard-hitting car reviewing throughout the years but I was hoping for more car content in the show.

The task went swimmingly well and the whole thing was completed without hitches. No, of course it didn’t; the trio starts with five cars, which soon becomes four. Some more mishaps happen an before you know it, only one car is left. This comes after a boat is broken, another boat is taken away and a pristine Bajan beach gets very disrupted. I’ll admit it was good fun to watch, but it was lacking… well, cars.

In between the Barbados film we saw AC/DC singer Brian Johnson get stampeded by an American football team, which when brought a mock fight similar to the one in episode one when the trio said the RAF was the best flying force in the world. As always, that bit felt dragged out but ‘Conversation Street’ made up for that, in which Clarkson, Hammond and May discussed American classics and compared them to their modern day counterparts.

So there we have it, episode 10 is done and dusted, leaving us with just two episodes left. I’m looking forward to them, but I just hope there is a bit more car content to see out the series.