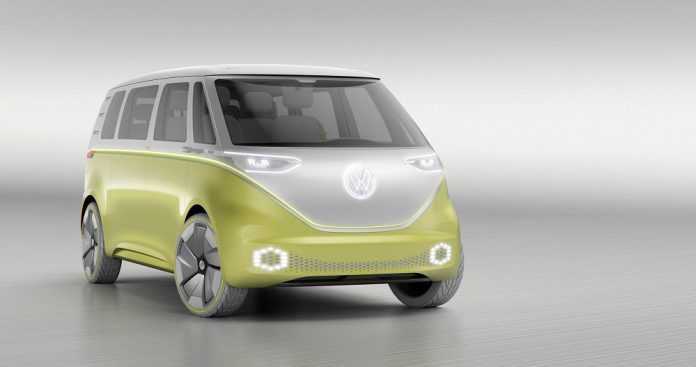 The North American International Auto Show has kicked the year of style with some wonderful and interesting cars on show, including this, the new Volkswagen I.D. Buzz concept car.

Looking at it looks like a futuristic campervan and in truth I suppose it kind of is. With its 3.3m wheelbase, the I.D. Buzz will offer plenty of room inside with seating for eight occupants. The shape and form – albeit very’tomorrow’ – may look nostalgic but the underpinnings are bang up-to-date – and then some.

The I.D. Buzz features electric motors on both the front and rear axles, meaning that it has four wheel drive and thanks to a large battery fitted in the vehicle’s floor, it has a fair bit of power as well. 369bhp is on tap, meaning this all-electric MPV will hit 62mph in 5 seconds. The top speed is less impressive though – that comes in at just 99mph. Ah. Well at least it’ll get to 62 at a decent rate.

The range from the battery will be up to 600km, which in Queen’s English is just over 370 miles and you’ll be able to charge it to 80% in just 30 minutes when using a 150kW power supply. The I.D. Buzz can also be driven in a fully automated mode; just simply push the steering wheel in to the dash and the car will on to drive itself. This then allows the driver to turn their seat around to face their passengers, kick back and relax.

Speaking of the steering wheel, it features touch sensitive controls rather than traditional buttons and the infotainment system and air con is also controlled through touch, this time n a removable tablet. An augmented reality has been installed for the head-up display which will display key information to the driver, ensuring the journey is smooth and stress-free.

I think it’s a cool looking motor but will it be able to live up to its buzz its created?