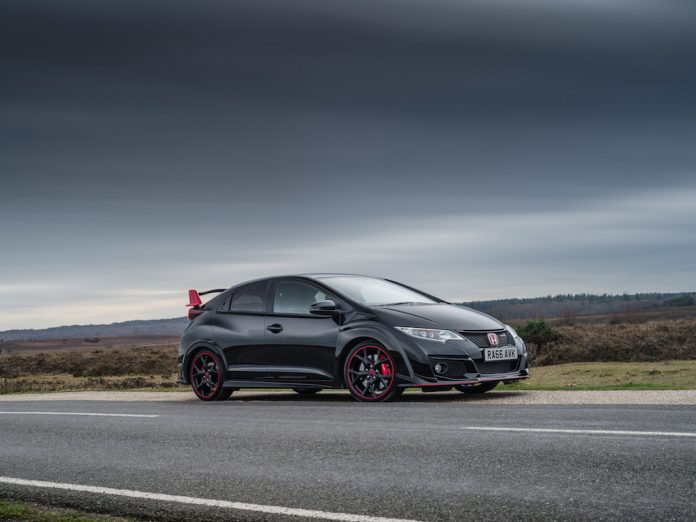 2,500. That’s the number of the current generation of Civic Type R models to be made for UK roads and I for one think that is a rather lower number. Although that does explain why I don’t come across many when in general use. The Japanese brand has something special lined up for the last 100 to be produced though.

One thing I love about the current Civic Type R is the flamboyant styling that makes no apologies for being a boy racer. If this were a best man it would turn up the wedding late, become quickly drunk and then pass out, knocking the wedding cake over in the process. They should have called it the Civic Gazza if you ask me. Now, this is not a complaint, in fact I like the way the car embraces what it really is instead of being ultra-subtle like a Volkswagen Golf R.

The new Black Edition is a darker animal though. Quite literally. As you would expect, it’s finished in black, which I think look superb and you may be wondering what exactly is different. Take a peak at the rear spoiler and you will see a big splash of red on each of the endplates. This theme continues inside where there is plenty more black and red, making the car look even more aggressive than it already is. Phil Webb, head of cars at Honda UK, commented: “There are only going to be 2,500 of the current Civic Type Rs on UK roads, so the car is going to be pretty special as it is – but with the addition of this special limited run of 100 Black Editions to the product line up and owners will have a real collectors piece on their hands.”

Now I’ll admit the price for this extra design is a little bit pricey. It’s £32,300 whereas the standard model is around £30,000 but seeing as the Black Edition models are the last 100 it’s your last chance to get your hands on the current edition Type R, plus it means you get what could a collectors item… Don’t hang around though, as it won’t be available for long…