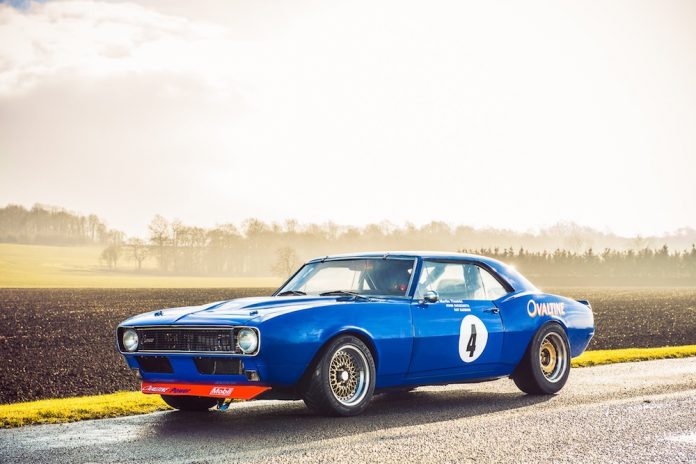 It’s with no doubts that the Chevrolet Camaro is one of the legendary muscle cars and one that has stood up to the test of time. The car is still being made to this day, with the Camaro currently since its sixth generation since its birth in 1967.

It’s the first generation which is to be represented by Silverstone Auctions, a 1968 example to be exact. Only it’s not the average Camaro, oh no. This very Camaro was converted in to a racecar (couldn’t you tell?) to compete in the 1971 BSCC race at Crystal Palace, which gained the accolade as one of the BBC’s ‘100 Greatest Sporting Moments’.

Powered by a 5.0 litre small-block V8 engine, this Camaro was originally bought by Bill Shaw Racing with the intention to get the car race prepared for 1970 British Saloon Car Championship season. Former champion Roy Pierpoint was drafted in, as was Martin Thomas.

​​For the 1971 season however, the car was passed on to Thomas and under his watchful eye, he was able to take the chequered flag at the International European Meeting at Magny-Cours as well as a string of podium finishes. The car was also victorious in the Beech Trophy at Silverstone and at the Miller Craft meeting at Thruxton.

The race that truly made the car what it is today was the 1971 BSCC race at Crystal Palace where Thomas was involved in a three-horse race including himself, Mike Crabtree in a Ford Escort RS1600 and Gerry Marshall in a Vauxhall Viva GT. After plenty of close racing, Thomas held off Crabtree and Marshall to take a famous win.

The car was then retired from racing in 1973 but retained by Thomas before it was rebuilt in the early 90s and brought back to the smooth tarmac of racing circuits. 2004 then saw the car sold to its current owner, who continued to use the car at Heritage Grand Touring Cars, the Aston Martin Owners Club Masters and Classic Sports Car Club events.

The car has also made special appearances including the 50th Anniversary of the BTCC at Silverstone, BBC’s Top Gear 50th Anniversary of Touring Cars and a special recreation of the famous 1971 Iberia Trophy Race , as part of ‘Motorsport at the Palace’ in 2014.

“This Camaro has a strong following and reputation and is well known on the racing scene”, continues Rutter. “I have no doubt that it would be welcomed by organisers anywhere and it is the perfect candidate for blue riband events like the Gerry Marshall Trophy at the Goodwood Members Meeting, or perhaps the HSCC Historic Touring Car Championship. BSCC fans have a unique opportunity here to own a really special car.”

The car will go to auction on the 24th of February at the Race Retro International Historic Motorsport Show with an estimate of £65,000-£75,000. More details can be found here.