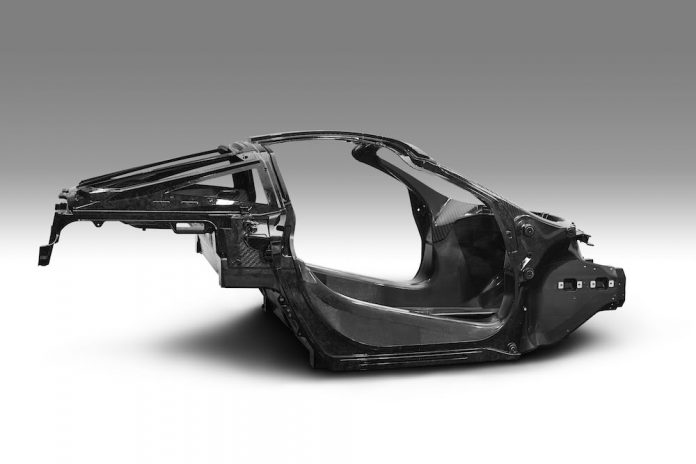 McLaren will be debuting its second generation of its ‘Super Series’ at this year’s Geneva Motor Show, but luckily for you I can provide you an early access picture of what it will look like. I’m sorry, that was a tad cruel, although that is what it will look like underneath. What you are looking at though is what McLaren has dubbed the Monocage II and it may just look bare and a tad rudimental, but it’s actually rather sophisticated. It’s made from carbon fibre, meaning its strong as it is light, and because of this, the full car to be unveiled will weigh 1,283kg – 18kg than the 650S, part of the first generation Super Series which is to be replaced.

Speaking of replacement, this is the first time a product family has been replaced by McLaren Automotive as the British brand enters the next chapter of its journey. The new Super Series will be the first of 15 new cars part of the brand’s Track22 Business Plan, which includes £1billion being pumped in to R&D between now and 2022.

“Super Series is the core of the McLaren business and personifies the blend of extreme performance, crafted luxury and unparalleled driver involvement that is the McLaren heartland,” explained McLaren Automotive CEO, Mike Flewitt. “This is the first time we have replaced a product family and the new Super Series will be absolutely true to McLaren’s pioneering spirit in being a revolutionary leap forwards, both for our brand and the supercar segment.”

​​The Monocage II will provider a wider entrance in to the cabin as well as a lower sill, giving drivers and passengers easier access to the car. It will offer better all-round visibility, making the car easier to live with. Owners will also be able to specify a ‘Visible Monocage’ – this exposes the material on the inside of the A-pillar. Each to their own I suppose…

The new model will be unveiled with great anticipation at the Geneva Motor Show on the the 8th. I’m very much looking forward to that!