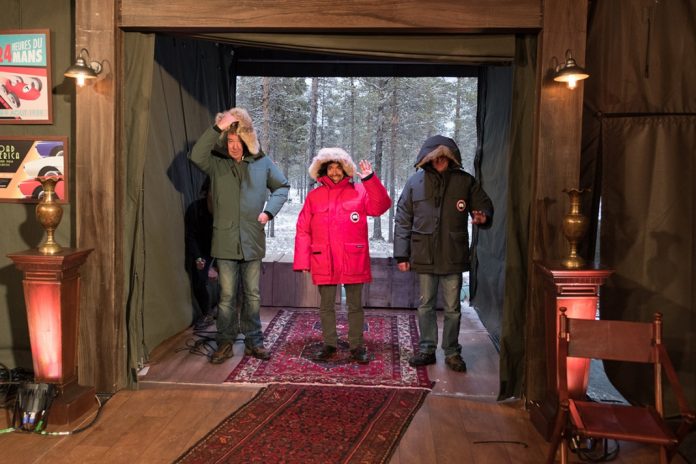 Chocolate, condoms and Bob Geldof featured in this week’s episode of The Grand Tour, which was brought to us from Finland. This episode marks the halfway point in the series and it was awash with cars from the colossus that is Ford.

One of the things that piqued my interest from seeing the trailer for this show was seeing the Ford Focus RS, a car which I’m a massive fan of, even though I’m yet to drive one (I haven’t given up hope!). That wasn’t the only car to star in the film though; the car that actually kicks off the film is the Ford Mustang, driven by the wannabe American Richard Hammond.

He goes to the Port of London to welcome the very first Mustang to come to the UK and it was clear to see how excited he was. He then sets about to take the V8 muscle car of a tour around the UK, which included a cheeky dig at Top Gear – see if you can spot it, shouldn’t be difficult. He becomes rather romantic about the whole tour before the orangutang turns up in of course, the Ford Focus RS. Soon after Clarkson arrives, Hammond decides he’s had enough and quickly buggers off. Charming.

We pick up the action after Conversation Street and the two are at it hammer and tong to prove which car is the better. They try a ‘car chase’ to see which is the fastest and that proves to hold no accurate answer, so they use a more tried and tested method – a drag race. I’m not going to ruin the outcome for you, but it’s closer than I was expecting. The timed laps around the ‘Eboladrome’ throw up a surprise as well… It wasn’t a bad film overall but I feel it could have been more in-depth…

We then move in to ‘Conversation Street’ where the discuss car interiors and which is the worst chocolate bar to eat in a Volvo. A rather pointless and indulgent segment but I must admit I found it funny nonetheless. Fast forward to the other studio segment in the show, the trio take on Christmas gifts after ‘killing’ Kimi Raikkonen, which as you can you imagine ends badly.

​​My highlight was the Grand Tour themed condoms which bear slogans from the trio on them. We’re then treated to seeing Clarkson fall arse over tit before a virtual Bob Geldof knocks over The Grand Tour Christmas tree over. All good natured fun which is quite a contrast for the film that follows.

The Grand Tour boys are very good at cocking about and falling over, so you’d be forgiven for sometimes forgetting that these three can do proper broadcasting very well. Step forward James May and his history lesson on one of my favourite automotive stories, the Ford vs. Ferrari rivalry. Now I’m not going to say to much about the film in case you do not know the story, but if you don’t already know the story then you’re in for a treat. Mind you, even if you do know the story you’ll still love it. In the film May drives the original Ford GT40, plus one of the very models that competed at Le Mans, and if that wasn’t enough, he also drives the Ferrari P3 for good measure. What I love about this film is that it’s shot very well, it’s honest and it’s all about the cars, no tricks or gimmicks.

What a wonderful way to finish the episode.