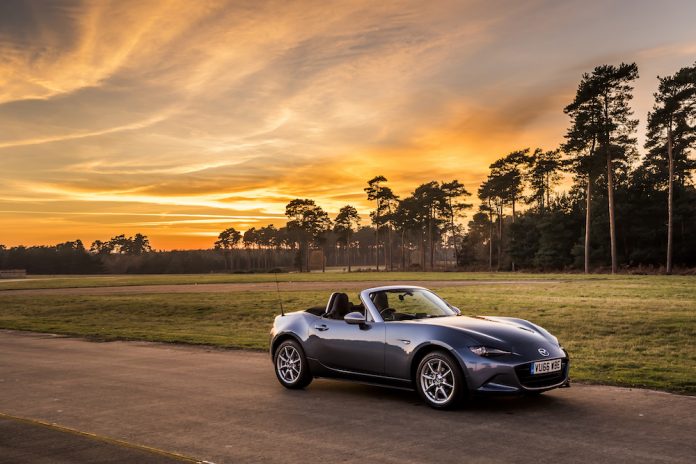 Mazda is no stranger to bringing out limited editions of the MX-5; over the years you’ve had the Sport, Icon, Nevada, Angels, Arizona… the list goes on. There is now another one, and one that has been seen before the Mk2, the Arctic.

What can buyers expect?

Priced at £20,995, the new Arctic will include features such as Blue Reflex metallic paint, silver wing mirrors and windscreen surrounds. Is that it? No, of course not, buyers will also be treated to an enhanced list of standard kit including heated leather seats, automatic headlights and wipers plus rear parking sensors.

On top of the styling features already mentioned, the MX-5 Arctic also has silver headrest hoops, 16″ silver alloy wheels, chrome scuff plates and finishing the look are silver cup holder rings. It will be based on the SE-L Nav, so it will be powered by the 1.5 litre engine which offers 129hp, which won’t set you hair on fire with performance but let’s remember what the MX-5 is about shall we? ​​Commenting on the launch of the new MX-5 Arctic, Jeremy Thomson, Managing Director of Mazda Motors UK said “We are delighted to offer another special version of the award-winning MX-5 convertible; we’ve had a long history of producing distinctive limited edition MX-5s that allow customers to drive a sports car with stand-out looks and enhanced standard equipment. The new MX-5 Arctic’s exclusive looks and great value mean it’s sure to be a popular choice when it arrives in dealerships early next year”.

Oh, just one more thing, only 400 will be available so if you’re interested you’d better not hang around!