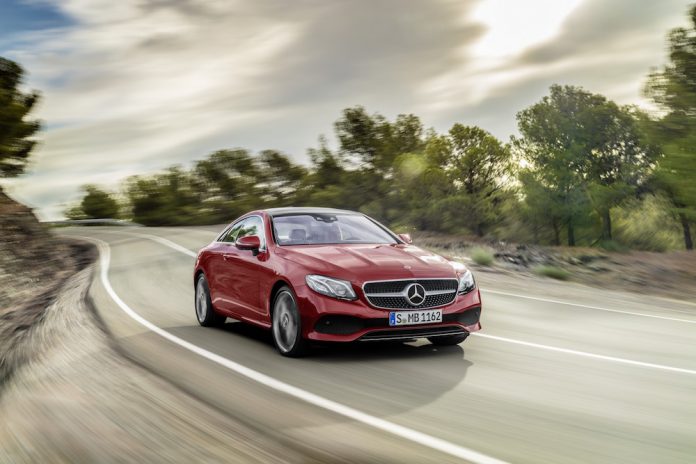 Ah a new Mercedes-Benz model, for me in particular this means one thing. A rather long press release, although this wasn’t too bad for once. Enough of bumpf though, let’s get to the task in hand and that is the new E-Class Coupé. The new model will join the saloon, estate and the all-terrain models announced earlier this year.

A Larger Class of Mercedes

One of the key talking points from the new model is that it’s grown in size, in all areas in fact. The length has been increased 12.3cm, its wider by 7.4cm and it’s also 3.2cm taller – despite being 15mm lower than the saloon. This may make a bit more difficult to park and manoeuvre, but it does mean that it has more space inside. Rear passengers are treated to 7.4cm more rear legroom with a little more headroom (1.5cm in fact). Those in the front will be treated to a bit more headroom as well as more shoulder and elbow room. As you’d expect, the E-Class is able to serve up a fair bit of tech. Two different 12.3″ screens will be available as an optional extra, which are unique to the segment as they are merged under a single lens, thus causing a “floating Windscreen Cockpit” effect. Also available as an optional extra is a touchpad which can be fitted on the centre console, which is able to recognise signatures, although I’ve never felt this is something I’ve missed from a car but never mind. ​​The entry-level will receive a smaller, 7″ colour display cluster with two dials as well as a 8.4″ touchscreen sits in the centre console. The steering wheel has some pretty interesting tech too – touch control buttons can be found here which can be used by the driver in a finger swiping motion, rather than a physical push. I don’t know about you but I think that’s pretty cool. ​It doesn’t stop there though; on top of the normal smartphone integration we have become used to, the E-Class has something called Remote Parking Pilot. Using a smartphone app, owners will be able the car to be moved out of a garage or a tight parking spot via remote control. No, you did read that right. Another notable piece of tech are the multibeam LED headlights, which uses 84 individual high-performance LEDs that are able to light up the road like a Christmas tree but without dazzling other road users.

What about the power though? The new four-cylinder diesel will be present in the E-Class Coupé roster; the 2.0 litre engine is able to produce 194hp, up to 71mpg (average) and up to 106g/km of CO2 emissions. This will be mated to a 9G-TRONIC automatic gearbox which will be fitted as standard. A 3.0 litre V6 is also available, which is also fitted with the 9G-TRONIC ‘box and offers 333hp.

Prices and release date is yet to be confirmed by the German brand, but that will come later in the month and deliveries will come in April next year.