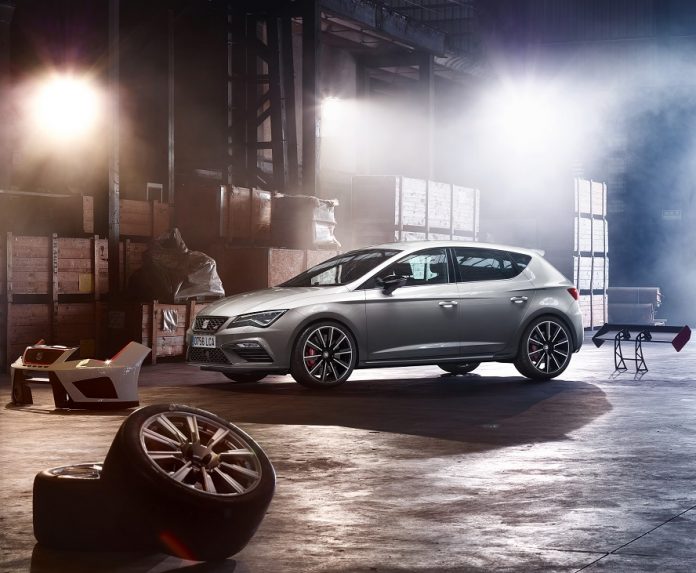 You may remember that the SEAT Leon was given a mid-life refresh not too long ago and now the Spanish brand has announced the new Leon Cupra 300 – the fastest road car it’s ever produced. Oh goody. As a SEAT owner and a big fan of hot hatches this has caused quite a bit of excitement for me. Before I get all giddy like a schoolgirl that’s been asked out by their crush let’s go through the detail of the new model.

It’s called the Curpa 300 because the car produces 300PS (296bhp) and 380Nm of torque, making it the brand’s fastest road car to date. So with that in mind that’s talk some performance figures shall we? This is a tad awkward as SEAT has not announced figures yet, however seeing as this car offers a marginal increase on the outgoing 290 model you can expect to hit 62mph in under 6 seconds and a top speed of 155mph.

The power comes from the same 2.0 litre TSI engine which has been tweaked to give a bit more oomph which can be enjoyed in a choice of three body shapes; three-door (SC), five-door or estate (ST). If you opt for the estate you’ll receive four-wheel drive and a DSG gearbox but the specification for the hatches has not been announced as of yet. ​Dynamic Chassis Control (DCC) will be on offer in all three though as well as progressive steering and an electronic differential system as standard. Other features you can expect include keyless entry, infotainment system with 8″ touchscreen display, electronic parking brake, wireless smartphone charger plus a whole host of safety features.

Prices are yet to be announced but you can expect the new Leon Cupra 300 to go on sale in the next few months with the car hitting showrooms in March. I’d best tell Santa how much of a good boy I’ve been then!