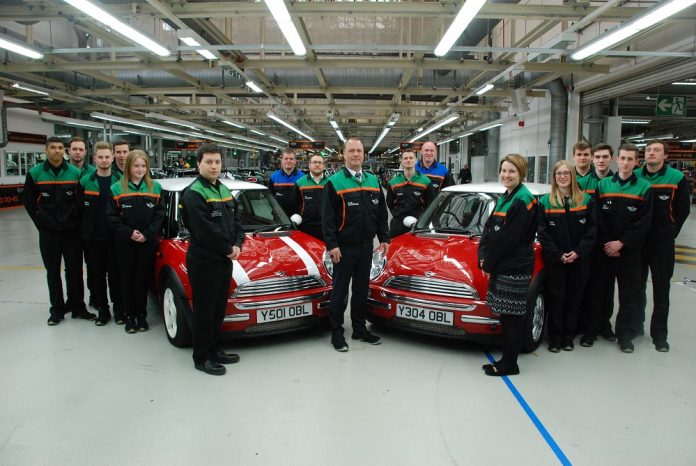 Earlier this year I wrote a piece about Mini celebrating 15 years in its Oxford plant and by that point it had pumped out around 2.5million models. Well now the brand is cracking open the champagne once more as it has no produced its 3,000,000th model. That’s 3,000,000 since BMW took over of course, a brand that is also in celebration because it’s reached the grand old age of 100.

So what was the 3,000,000th Mini to be produced? It was a Mini John Cooper Works Clubman which I’ll admit, isn’t particularly ‘Mini’ at all. In fact it’s a Mini in the same way I’m short. I’m 6 foot 2 in case you were wondering. Let’s not get bogged down in that for the time being, let’s get back on topic.

Oliver Zipse said: “It’s great to be back in Oxford to mark this fantastic MINI production milestone. Since we began building MINIs back in 2001 the car has proved to be hugely popular with customers right around the world. The passion and commitment that everyone here at the plant has for building a high-quality product is central to that success. The three millionth Oxford-built MINI is a remarkable achievement. Congratulations to everyone who has played their part in making this celebration possible.”

The Oxford plant may be able of producing around 1,000 Minis per day, only 20% will see the roads of the United Kingdom. The rest (80% in case you’re bad at maths) are exported out the country to over 110 markets worldwide. Yes, that’s right 110. That is no mean feat and it goes to show how popular the Mini is, even though it’s not as small as it used to be. Kind of like the opposite of a Curly Wurly.

Frank Bachmann, Managing Director of Plant Oxford, said: “Hitting this milestone is a fantastic achievement for everyone on the team here at Oxford. Building the volume of high-quality cars that we have over the past 15 years is something everyone working here can be very proud of.”