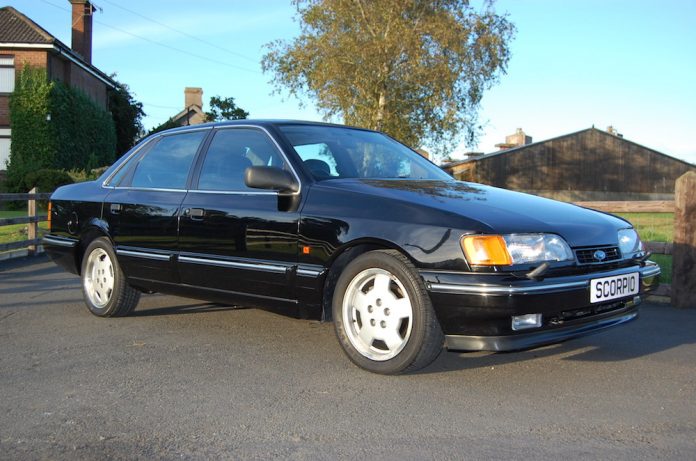 Now if I were to mention the words ‘Ford’ and ‘Scorpio’, you are likely to think of the godawful second generation of the 90s which looked like a frog. Don’t forget about the second generation which may be a bit bland in its styling but it’s a lot more conservative, plus people won’t snigger when you drive past.

Where am I going with this? Classic Car Auctions will be offering such a model at its December sale taking place at the Warwickshire Exhibition Centre. Don’t worry, it’s not the ugly second generation model on offer – the one going under the hammer will be a 1991 example which has covered just 1,325 miles. ​​This is a pre-production model which was donated to a technical college in Belfast by Ford for training purposes. It then travelled to County Antrim where it performed the same role before it was then put in to storage. This appeared to be the end of the road for this car as these kind of cars are normally scrapped but one of the college lecturers (and current owner) heard about its fate and stepped in to save it.

“When I heard the car was going to be destroyed I just couldn’t let it happen,” explains the car’s owner. “It’s in stunning condition and has barely been used. I planned to keep the car forever, but a change in my circumstances means that, sadly, I have to let it go. I’m hoping another Ford fanatic, like myself, will give the car a good home.”

Because of its low use and appropriate storage the Granada Scorpio, its presented in showroom-like condition with all of its electrical gizmos still working. The black leather interior is equally as spotless , adding to the overall high presentation of this rare car. It’s offered with no reserve and CCA has not specified an estimate so who knows what it could go for?