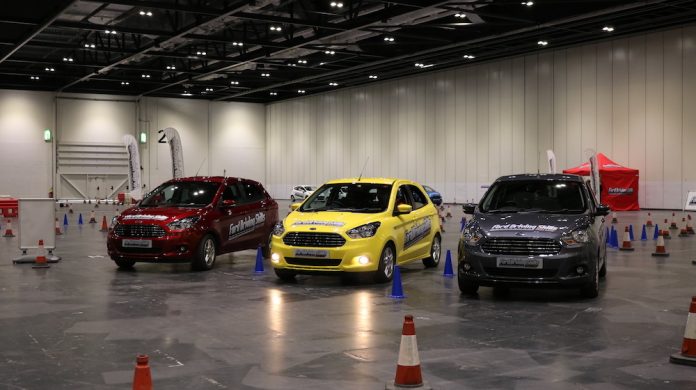 Good evening everyone, sorry for the late post tonight, it’s been a bit of a busy day. As you may have seen on my social media I spent the day at ExCel London where I was taking part in Ford’s Driving Skills For Life.

What is Driving Skills For Life?

This is a safe driving programme that Ford has been running in the United States for over a decade but it’s only been going a few years in the UK. It gives drivers aged18-24 the chance to hone their driving skills and learn more about safer driving in a safe controlled environment. The best thing is that’s free, so there is little excuse not to attend, especially if you’re a new driver. I started the day getting to grips with the “drunk goggles” that give the effect of being drunk and visually impaired as a result. The first task is to try and walk in a straight line, which is a doddle when you’re sober but when you’re seeing double and the world is blurry it becomes a different story. My first effort was woeful but my second effort wasn’t too bad. ​​After that you are tasked with trying to score a goal which was incredibly difficult to do as the double vision created two footballs and two right foots heading towards them. I struck only air quite a few times but after some time I was able to make contact – albeit poor – with the ball. After that I was giving different goggles, a vibrating glove plus weights on my left foot and both arms. A very odd sensation indeed.

I jumped in to a Ford Ka+ as I set about on a tight course made of cones with a Ford instructor called Bertie. The first lap was all about getting to grips with the car and then on the second lap I had to operate the radio whilst driving before turning the music up to a louder level to create a high distraction. Last but not least I was asked to take my phone out and post something to social media whilst on the move. As you can imagine it was all rather difficult!

The next part was the bit I was looking forward to most – the handling session. This was all about learning how to tame the car whee the back becomes loose when the grip goes. The back tyres were plastic instead of rubber to help the car lose traction more easily. I started off slow as I got used to it but as I went on I became faster and more confident.

One my last effort I was able to pull of a half decent drift and best of all, I didn’t spin. I didn’t spin at all in fact – *wears Jeremy Clarkson style smugface*. Kev, the instructor provided many compliments which as you can made me feel preeeetty goo!

Time For A brake

The last part of my day involved emergency braking in two different situations. The first was a standard emergency stop from 30mph, which wasn’t the most taxing but I still learnt a little bit from it nonetheless. The second scenario was more challenging though and required more thought.

In this scenario I headed towards three ‘motorway lanes’ that were closed and as I approached at 30mph one of the lanes would become open I had to brake and steer towards that lane. It took me a moment to get it but on the second try I was able to do better than my first try. Dan my instructor was informative and helpful all throughout, giving me the confidence to push on.

They also had a demonstration of Ford’s Active City Stop which is the brand’s name for Autonomous Emergency Braking. I didn’t have time to give it a go but I’ve already experience a similar system in a Volvo at the London Motor Show so I wasn’t too fussed. There was also Batak reaction test there which I OK at plus there was a brand new Ford Mustang there which was sadly not for driving.

Overall it was a good day and I’m thankful for Ford to have me down. I think it’s great that Ford is able to offer a course like this, especially when it’s free! I also feel there are elements in the day that should be included the driving curriculum as it could prove vital in the real world. If you fancy attending or you want to find out more details, head to www.forddsfl.co.uk.