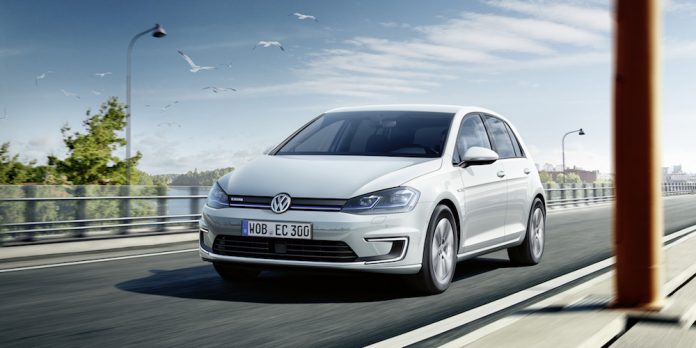 This week saw the premiere of the new E-Golf which will have a bigger battery, meaning 50% more range plus gesture control, a world-first on a zero emissions vehicle. But the E-Golf is much more than a bigger battery and a fancy 9.2″ touchscreen.

One of the highlights of the new E-Golf is the increase in battery size. It’s gone from 24.2kWh to 35.8kWh, which means around 50% more range, meaning 300km as measured in the New European Driving Cycle. The new battery can be charged to 80% in just an hour when a fast charge is used and it takes around six hours to get to 100% when a traditional wall socket is used. ​​As you’d expect with a bigger battery it offers more power than the outgoing model with a power out of 134bhp. Torque has also been increased from 270Nm to 290Nm, which isn’t a great deal but it’s a step in the right direction. 0-62 comes in 9.6 seconds which isn’t that fast and the top speed doesn’t even go above 100mph. In terms of economy, buyers can expect a maximum of 116mpg although real world driving is likely to get different results.

As mentioned at the top of the article the E-Golf is the first zero emissions vehicle to offer gesture control from its huge 9.2″ touchscreen. Pretty cool eh? Not too sure how much it will be used by owners but it’s a cool feature nonetheless. More safety kit has been installed as well, which includes Traffic Jam Assist, Front Assist with City Emergency Braking and Emergency Assist. Prices and release date are yet to be announced.