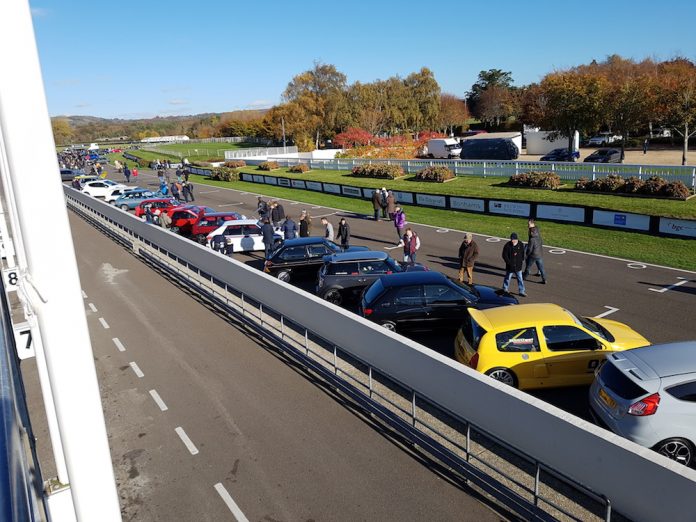 So I was scrolling through my Facebook last night and I came across an event which was enough to make my mouth water. Either that or I was dribbling whilst I had that strepsil in my mouth (I’m a tad poorly). The event in question was one of the Goodwood Breakfast Club meets, this one had the theme of hot hatches so I was very keen to go.

I had been invited by Shaun Loader (Gravesend MG Owners Club) to watch the Veteran London to Brighton run but as it was an early start I declined. So I felt a bit bad going to Goodwood instead but at least it meant I was able to get a small lie-in. Plus I had to be in that area anyway as I was seeing family in Worthing – any excuse.

***UPDATE: The rather long but hopefully enjoyable video of the day can now be found right… HERE.***

The last time I went to Goodwood even the car park put on a decent effort and it was much the same today. As soon as I pulled in I was able to spot a McLaren, a few Nissan Skylines, a few Porsches plus many, many more. If truth be told i could have easily just walked around the car park for the morning although that may have looked a bit suspect. Plus all the hot hatches were inside and that is what I’d come to see.

I may have turned up midway through proceedings but there was still plenty of hot hatches for my delectation and I didn’t know where to start. One of the first cars I spotted was a Ford Focus ST belonging to Surviving The Nightlifer Olly Wild. I actually bumped in to him at the end of the day and I’m hoping to do something with his car. Not sure yet but I’m thinking about how to get him to agree to me driving it.

There were models from all brands and it’s hard to think of any models that weren’t there, everything from the Abarth 595 to the Renault Turbo was in attendance. There was even an MG Metro Rally car in attendance. There was not one but FOUR Ford Focus RS models there in varying colours plus three Renault Clio V6s. What’s even better is that this meet was completely free.

This was actually the last Goodwood Breakfast Club for this year but if you fancy going to one next year check out this link and keep an eye out for the next one. Why not, it’s free!