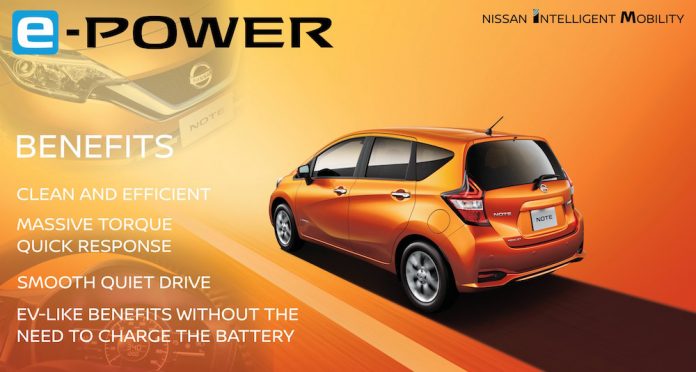 Electric is rapidly becoming a big part of today’s (and tomorrow’s) motoring market and pretty much every manufacturer wants to get involved in some shape or form – even the Mini has a hybrid variant nowadays.

Japanese brand Nissan has now announced a new electric drive system called e-POWER which borrows technology from the best-selling car in history, the Nissan Leaf. The big difference between e-POWER and the traditional system in the Leaf is that it uses a small petrol engine to charge the battery, meaning it does not need to be plugged in to the mains. ​​Personally I think this is a far better option as I think a world full of cars that take hours to charge is a step backwards and not forwards. The e-POWER system still uses an electric motor to provide drive to the wheels. But unlike a full electric vehicle the power sources comes from the engine and the battery. Still with me?

Basically the engine helps to charge the batteries and provide power but it’s only the electric motor itself that drives the wheels – simples. Now you may think ‘Well why has this not been done before?’ and there’s a good reason for that. It’s not an easy thing to pull off but Nissan has been able to develop a system small and light enough to fit in to a compact shape to make this possible.

The benefit of this system is you’ll still get the instant torque on an electric powertrain and the fuel economy of a hybrid, but without the nagging thought of needing to charge. This means the dreaded range anxiety would no longer be an issue. This then, does appear to be a step forward. Well done Nissan, well done.