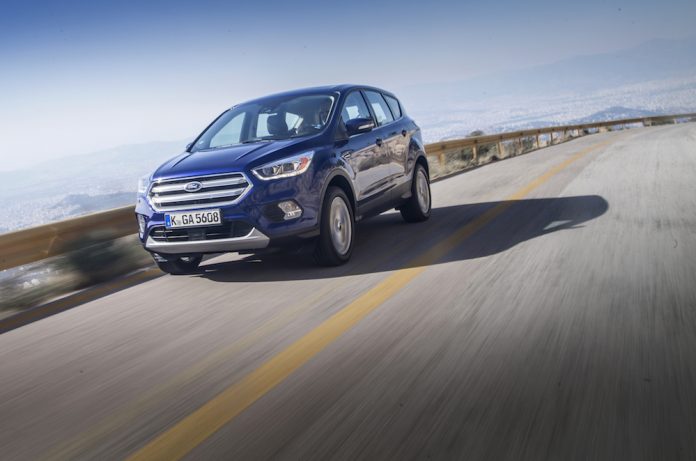 Apologies there was not a new article yesterday, I was out filming the video for my upcoming Suzuki S-Cross review, which I will be editing over the couple of days and uploading shortly after. Anyway on to today’s business – the new Ford Kuga.

A fair bit is the easy answer to that question. But to put it in more detail the new Kuga is able to boast updated styling, new tech and improved engines. It looks like Ford has covered every angle then. Let’s delve even deeper to see what changes have been made on the sparkly new Kuga.

Let’s start with an area I can always appreciate in cars – technology. Ford’s new SYNC 3 system which is the result of customer feedback and over 22,000 pieces of feedback. So you can safely say it’s been made by the people, for the people. The 8″ touchscreen offers faster performance than its predecessor and also features five additional languages. ​​The new system supports Apple CarPlay so iPhone users will be able to use the smartphone integration with greater ease but don’t worry Android users, Android Auto is also available. What’s better still is that the voice recognition can be used to open apps so you barely need to left a finger to access your favourite apps.

Nowadays it’s not unusual for a car to park itself, well it may be when you’re seeing it with your own eyes or witnessing it yourself, but the functionality itself is coming more mainstream. The Kuga is able to offer this but it also offers something called Perpendicular Parking, which allows the SUV to park itself alongside other cars which will come in handy in those tight supermarket car parks.

All the ‘newness’ is not exclusive to what lies beneath the metal, the styling has been tweaked. This means a new grille which is surrounded by a set of new headlights which incorporate LED running lights, plus the rear lights have been updated to give a more sporty look. The inside has been revised as well to make it easier to use, this includes the addition of an electronic parking brake to free up space previously used by a manual handbrake, plus the steering wheel controls have been simplified.

The new Kuga sees the addition of a new 1.5 litre TDCi diesel engine which replaces the 2.0 litre unit but is still able to offer the same power (118bhp) whilst offer 5% better fuel economy. The 1.5 litre unit is able to offer up to 64.2mpg and 115g/km of CO2 emissions, making it the most economical engine in the Kuga range. ​​The more powerful 2.0 litre units (148bhp and 178bhp compared to the outgoing 118bhp unit) stick around but they are cleaner thanks to new technology that reduces friction in the engine. There are of course petrol options available in the form of the 1.5 litre EcoBoost that comes in three power outputs – 118bhp, 148bhp and 180bhp.

The price for the new model starts from £20,845 which will fetch you the base model Zetec and the range-topping Vignale will cost you at least £30,795.