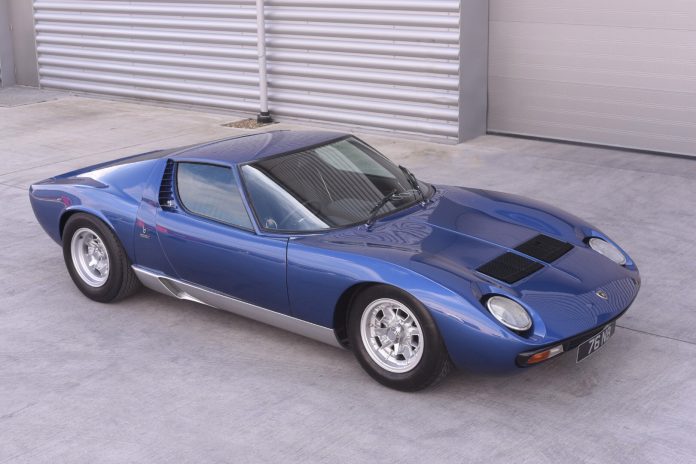 World-renowned auction house COYS has announced its able to offer some rather tasty motors at the upcoming auction taking place at the Classic and Sports Car Show. As you’ve guessed by the headline some of the cars once belonged to famous rockstars.

A total of sixty cars will go under the hammer at Alexandra Palace, two of which belonged to Rod – sorry Sir Rod Stewart – and U2 Bassist Adam Clayton. Now I’m not a fan of Sir Rod’s music (or his dress sense) but I’m definitely a fan of his taste in cars. The car in question is a a 1971 Lamborghini Miura, a car hailed as many as the first ever supercar.

Fitted with a 4.0 litre V12 engine mated to a five-speed manual, this Miura P400 S is able to get to 60mph in under 7.0 seconds and then on to a top speed of around 170mph. It’s also finished in a subtle but classy looking navy colour which is offset by a silver finish on the side skirts. The estimate for this rockstar Lambo is a bank account-emptying £800,000-£900,000.

The car that once belonged to U2’s Adam Clayton is a 1972 Masrati Ghibli which may not be as spectacular (or expensive) as Miura but it is pretty rare. This is one of just eight right-hand drive models and is expected to sell anywhere between £240,000-£280,000. Under the hood is a 4.9 litre V8 which is able to offer 306hp. James Elliott, Group Editor, Classic & Sports Car magazine, said: “The addition of a classic car auction to the second annual Classic & Sports Car Show is an exciting development. Coys have gathered a wonderfully eclectic selection of classics for the sale and we’ll all be glued to the Panorama Room on the afternoon of Saturday 29th October to see what prices cars such as the ex-Rod Stewart Lamborghini reach.”