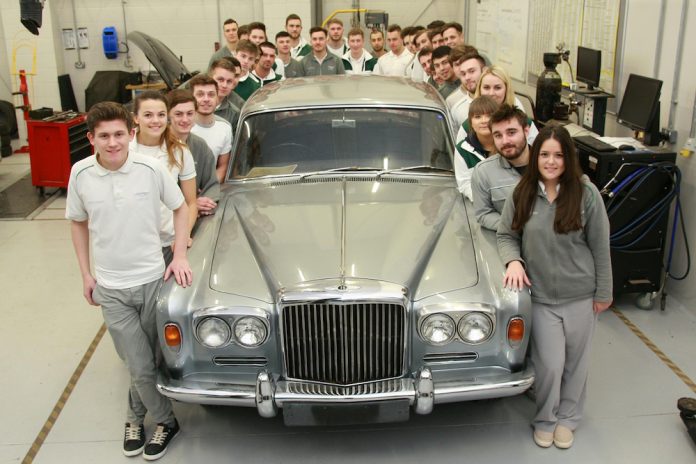 You may expect that as an apprentice you probably imagine you don’t have much chance yo cut your teeth on anything and that you’ll probably end up making many cups of teas. That is in between the trips to find long waits, skyhooks and of course, tartan paint.

Bentley however has got its apprentices in to the thick of the action by giving them the opportunity to develop new skills whilst renovate a 1965 Bentley T-Series. Ok, so they will be supervised and experienced experts will be doing the bulk of the work but still, renovating an old Bentley as you learn your trade is pretty cool. Once this model is completed it will join Bentley’s heritage fleet and will be used at car events across the globe.

The apprentices will help to complete and assemble the trim section as well as restore the body, paint and engine. Blimey, maybe they do get to do a bulk of the work after all. Produced between 1965 and 1970, the T-Series was the first Bentley model to feature a monocoque chassis. 1,004 were produced in this time and each one was powered by a 6 and 3/4 V8 engine which may sound full of performance but the top speed was just 115mph.

Bentley Master Trainer, Colin Jackson, who is leading the project, said “This is something everyone involved in can feel very proud of. Having the opportunity to bring back to life such an iconic Bentley doesn’t happen very often. The challenge of restoring this car means that our apprentices will develop the traditional skills that Bentley is so famous for, and sets them up for their careers building Bentleys of the future.”