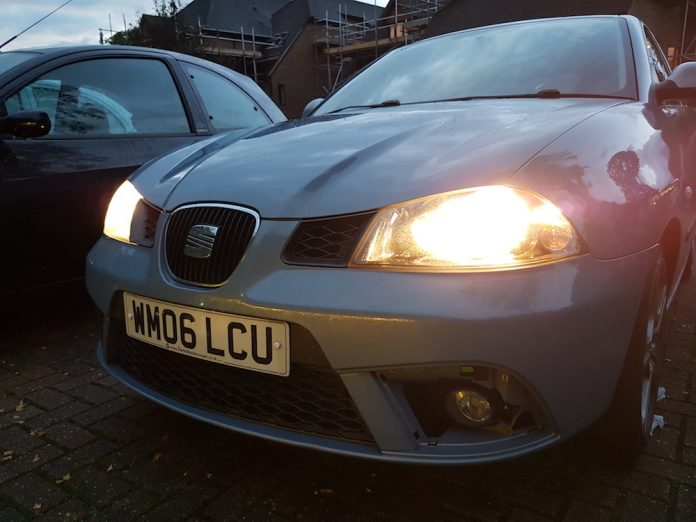 Evening everyone! As you may be aware, I was invited to the GTI Festival at Santa Pod by the Ibiza Owners Club and was even able to get on to the club stand which was pretty cool. I’ve never been to GTI Festival or Santa Pod, so I was rather looking forward to it!

I needed to meet Andy Conway, owner of ibizaoc.com and one of its members, Ellis, at the South Mimms Services at 6:45am. This meant having to get up at 5am – on a Sunday! It was still pitch black when we (my wife Patsy came for the ride) left and it didn’t start to get light until we got to South Mimms. I made up a three car convoy with Andy’s black Ibiza Cupra and Ellis’ black Leon Cupra – both of which looked very nice and very shiny. So needless to say I was the odd one out in my Glacier Blue FR!

After a second stop off at a Tesco nearer to the event, we joined a bigger convoy as we made our final approach to Santa Pod. It was great to see so many different SEATs and it was great to see them all park up when we arrived. I parked my car on the club stand and went for a wander to see what was about and had a peek at the cars from the Leon Owners Club, which Andy Conway also used to own incidentally.

One of the things I was must looking forward to was of course, taking my little Ibiza FR on to the Santa Pod tarmac. I got registered which was easier said than done as I’ve got to be honest, the Santa Pod staff weren’t overly helpful and in truth some of them were plain moody. Sorry to give the place a bad name but I’m only sharing my experience. The first part of the registration was fine but there was then a kerfuffle in regards to getting Patsy signed on as a passenger and also getting my race number.

​​I did the first run by myself as Patsy was sorting out her passenger wristband and this run ended up being my fastest of the day. I was apprehensive but I felt I did well for a complete novice at drag racing. I was in class E and was up against a stripped out Golf in a higher class. I put a good shift in and got a time a of 15.6221 seconds, crossing the line at 87.17 miles per hour. The Golf? Well that creamed me obviously, but it doesn’t matter as he was in a higher class.

The morning was a bit stop/start unfortunately as there was three separate incidents of cars dropping fluid on the track so it had to be closed so it could be cleaned. Annoying but obviously the staff have to do what they have to do. Patsy jumped in with me on the second run and I was able to put in a time of 15.7411 seconds with a speed of 87.35mph. Not bad considering I was now carrying a passenger.

​​There was a long wait for the third run and on that one I was able to muster 16.3642 seconds at a speed of 86.17mph, with Patsy in the car once more. She wasn’t in the car for the 4th run and I had an improved time of 15.6954 seconds at a top speed of 87.00mph but I still wasn’t able to beat my original time. I was still top of my class though and things were looking good. On that note I stopped for lunch and had a further wander around,

Wheelspin is cool –  but not as quick

On the 5th run I had pulled out the stops, Patsy wasn’t in the car once more and I decided to fold the wing mirrors in and turn the traction cool off – which I had done in one or two of my earlier runs. So I had got used to launching without the traction control but on my 5th run I had lots of wheelspin of the line and that killed my chances of getting a decent time. In the end I got 16.1612 seconds at 81.66mph

I learnt my lesson on my 6th and final run and turned the traction control back on. I was still top but I wanted to see if I could better my time to ensure my victory. Even with the traction control on I still had wheelspin off the line and this meant another slower run. 16.1134 seconds was my time but I was able to get my fastest speed of the day at 88.90mph.

So I went in to the race office to find out if I had won and to my surprise I found I had a new time of 15.4 seconds and I was astounded, especially as I thought my last run wasn’t that good. I noticed a problem though. The car number was E49 whereas mine was E42… So I went upstairs to race control to find that I had been leapfrogged right at the death and they had left my name on the leaderboard by mistake! What a choker! Gutted wasn’t the word!

The GTI Festival was a fun event that I’m glad I was invited to but I was still gutted about the cock up made by staff which led to believe I had won when I hadn’t. Still, it was great fun to take my Ibiza FR out on the dragstrip but I wasn’t brave enough to take it on the handling course as A) I didn’t want to make a tit of myself and B) a few people had damaged their cars and I didn’t quite fancy that.

Thanks again to the Ibiza Owners Club for inviting me and I hope to join them on many more adventures!