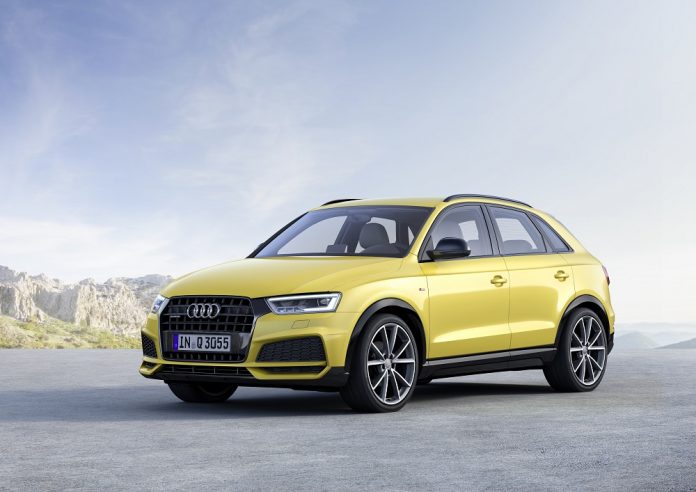 The Audi Q3 has seen new trim levels, with the most notable inclusion of the Black Edition, a trim that has also been applied to the A4, A5, A6 and A7 Sportback. With a choice of four engines it will be priced from £26,600 and available to order from October the 11th.

The Black Edition signifies a change in the trim levels of the new Q3 – SE has become Sport, S Line Navigation has become S Line Edition and S Line Plus has been replaced by the new Black Edition. Are you still with me? Complexities aside, let’s have a look what goes in to the new range-topping Black Edition. ​The Black Edition features as standard metallic paint, rear tinted windows, Bose sound system, 19″ alloy wheels and black detailing on the bodywork. This is on top of the toys you can enjoy in the lower models such as sat nav, cruise control and Audi Parking System Plus. Also included are parking sensors, smartphone connectivity, dual-zone climate control, 6.5″ infotainment system and LED headlights.

A choice four engines will be on offer- two petrols and two diesels. The baby of the bunch is the 1.4 litre TFSI unit which is able to produce 148bhp which can be specified to either a manual or S Tronic automatic gearbox. When fitted to the S Tronic, the Q3 will be able to get to 62mph in 8.9 seconds but is able to offer 51.4mpg when chosen with the manual gearbox. ​​If you fancy a bit more oomph there is a 2.0 litre TFSI unit which can also be specified with either a manual or automatic ‘box but can also be applied with a full-time quattro system. This engine is able to offer a power output of 178bhp. ​​There is a four-cylinder 2.0 TDI diesel unit that comes in two outputs – 148bhp and 181bhp. Once again, both can be specified with either a manual or S Tronic system and be used to power just the front wheels only or to all four when needed, thanks to the quattro system. It’s worth noting though that the more powerful TDI engine offers the best power and torque when the quattro system is active.

Audi’s Drive Select function will also be on hand to give drivers a choice of what kind of drive they want and is standard on all Q3 models. Last but not least, the boot is able to offer 420 litres of capacity and can be increased to 1,325 by folding the rear seats down, plus the S Line Edition and Black Editions come with a power tailgate to make loading even easier.