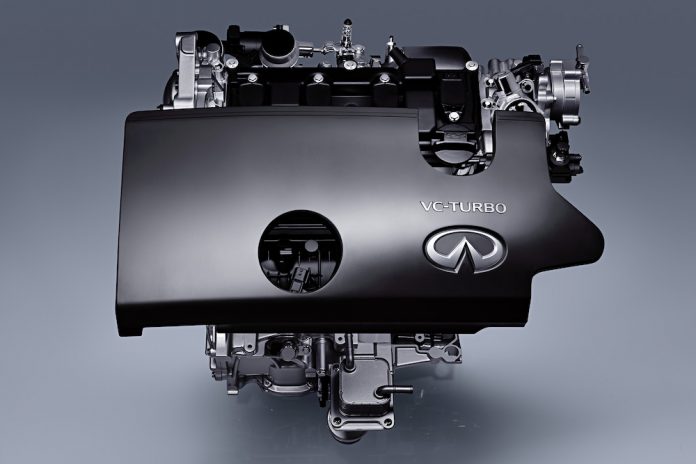 Japanese brand has been puffing out its chest like a proud dad over a new engine. But it’s not just any engine, this is the first production variable compression engine. Say what now? Don’t worry I’ll explain – we’ll I try anyway.

I’m afraid I don’t have James May on hand to answer, he’s rather busy at the moment, so let me give it a crack. Right, now then. Transforming on demand, INFINITI’s VC-Turbo technology uses an advanced multi-link system to seamlessly raise or lower the reach of the pistons, detecting the car’s driving condition and driver inputs, and instantly selecting the most suitable compression ratio. The engine is able to offer any compression ratio between 8:1 (for high performance) and 14:1 (for high efficiency).

Ok, I’ll admit it, I actually copied that from the press release. Some will call it lazy (and they’d be right to a point) but I couldn’t really think of a better (or simpler) way of putting it. In short, this turbocharged petrol engine is able to offer the kind of torque and efficiency one can expect from an advanced diesel engine. Hmm, it seems i was able to make it simpler. Never mind.

This 2.0 litre engine is able to offer 268bhp and 390Nm of torque. Although it has four cylinders but Infiniti says it will be comparable to a six-cylinder unit in terms of performance but is able to offer a higher level of efficiency. It has been fitted to the new QX Sport Inspiration concept SUV (pictured above) but if you want to get it in a car that you can buy sooner than look no further than the Q50 which goes on sale later this year.