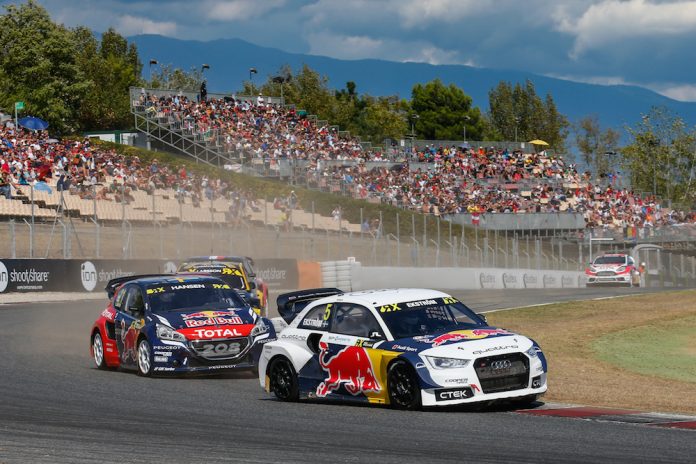 Hello and welcome to another one of Car Obsession’s World Rallycross roundups. Apologies I missed the last one, I was embarking on the South Downs Run so I was otherwise engaged. Since last time Kristofferson took the win in France to make things interesting and we are now very much at the business end of the championship with just a handful of rounds left.

This week the competition headed to the sunny tarmac of Barcelona as it was the turn of the Circuit De Catalunya to host the FIA World Rallycross championship. As always it was an eventful weekend with lots of thrills and spills.

Petter Solberg’s championship lead was hanging in the balance by just 5 points so he needed to make sure he put in a strong performance so that he would not be leapfrogged even before the semi-finals and final began. However, it was Timmy Hansen who was the overnight top qualifier after winning Q1 and putting in a decent performance in Q2.

Block’s not had the greatest luck this season and that continued in Q3 which his Focus RS RX ran out of power but thankfully the American was able to just about able to coast over the finish line in order to record a time and avoid a DNF. The same can not be said for Swedish driver Johan Kristoffersson as he was able to take the win in Q3 with a time of 3:15.817.

​​Track conditions changed dramatically for Q4 as the track had been watered, meaning the dirt parts of the course were very slippery. This of course, slowed down the pace of qualifying – Ken Block got the win in race 1 but with a significantly slower time of 3:35.110, this highlighting the slower pace of the track.

This was a point Petter Solberg was keen to moan about following his 3:26.814 time in race 2 but the track was able to dry out a bit under the hot Barcelona sun as Timmy Hansen and Johan Kristoffersson were able to get times around the 3:20 mark. Timmy Hansen was top qualifier and this meant Solberg’s lead was hanging in the balance by just one point.

The semi-finals threw up some interesting outcomes – semi-final one saw French driver Sebastian Loeb and Norwegian Petter Solberg bow after a close battle. This opened the door for Ekström, Hansen and Larsson were able to take up the first set of final places. The second semi-final also saw some interesting action – Timur Timerzyanov shot from the back of the grid towards the front.

​​Andreas Bakkerud on the other hand saw opposite set of fortunes as he found himself at the back having started as the front of the grid. Timerzyanov was able to claim the win in a very impressive drive, with Kristoffersson and Baumanis coming in 2nd and 3rd respectively.

Timerzyanov made a good start in the final but the Russian was soon overtaken by former championship leader Mattias Ekstöm. The Russian also drover an impressive joker lap and was able to slingshot in front of Kristoffersson but his great technique was used against hm later in the race. Despite this Timerzyanov finished the race in third after he looked like he was on his way to a win but it wasn’t meant to be.

It was Swedish driver Mattias Ekström who took the win, making it win number 4 this season. This means he goes back to the top of the leaderboard with a total of 204 points. Having seen his brother win the Euro RX championship Timmy Hansen took second place in the World RX final and Kristoffersson beat Timur to the punch to take third place. Solberg now sits in second place with 194 points and Kristoffersson is third with 182 points.