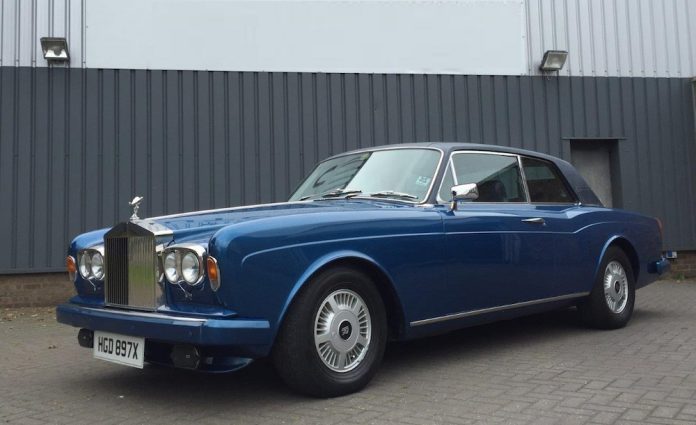 There have been a fair number of celebrities passing away this year, including Kenny Baker, better known as Star Wars character R2-D2. He was the actor who played the lovable robot R2-D2 in the Star Wars films before sadly passing away at the ripe age of 81 last month.

Classic Car Auctions is now offering the chance to own a classic Rolls Royce Corniche that belonged to the late actor at its September sale on the 24th. The estimate for the 1982 Corniche will be a respectable £33,000 to £32,600 and I imagine this will be a popular item when it goes under the hammer.

A small problem – no, not Kenny of course!

Now there is an elephant in the room which is of course height. Obviously Kenny Baker was a small chap (3ft 8in) so when he purchased the car in 2002 it was adapted in order for him to be able to drive it. If you were expecting something high tech – I certainly was – then you’ll be disappointed – the adaptation consisted of fixing wooden blocks to the pedals and propping the legendary actor with cushions. I kid you not, it was that basic.

​​Luxury always has a price

The Corniche was one of the most expensive Rolls-Royce models would buy at the time it was produced so it’s clear Mr Baker had expensive taste. Under the bonnet sits a V8 engine which has enable to the Rolls to cover 76,500 miles in a typically quiet and smooth manner. The car’s had four owners including Mr Baker and comes in good condition although it needs a little bit of work down to it. A comprehensive service history is available, as well as original handbook and V5 that proves it was once owned by Kenny Baker. ​​“Kenny wanted the best car in the world which just happened to be one of the biggest,” comments Guy Lees-Milne, auction manager at CCA. “Today the only indication of the special adaptation are some small holes drilled in the pedals, evidence of the car’s special story and unique provenance, which is sure to attract the interest of Rolls-Royce and Star Wars fans alike on auction day.”