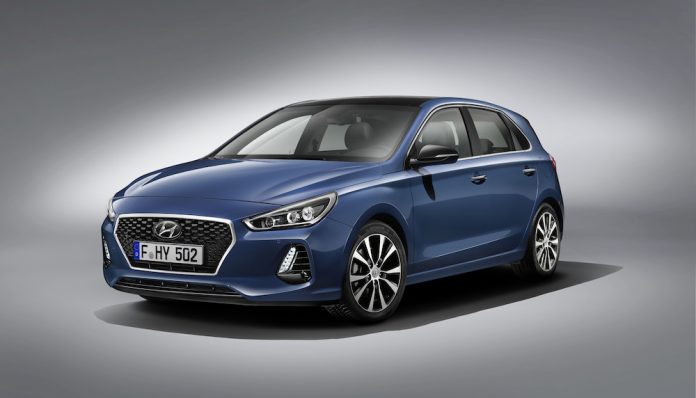 Hyundai has unveiled the new i30, a car which has been described as the ‘DNA’ car to represent the brand in Europe. Available early 2017, Hyundai says the i30 has a timeless design with a perfect for everyone’s needs – sporty, practical and elegant. That’s quite a bold claim, but has the Korean brand pulled it off?

Hyundai has set it sights on becoming the best Korean brand in Europe and it thinks the i30 could be the car to achieve that so quite a lot is riding on the shoulders of the new hatchback. Long are the days when Hyundai made cars that were overshadowed by its European counterparts in terms of design – the new i30 has “natural flowing lines” and features a new cascading grille which will become standard on the next generation of Hyundai models. ​It certainly looks sharp from the front but I think it’s quite a leap to say it’s a timeless design. I can’t imagine people flocking around one in 50 year’s time to admire the design but hey, who knows? To help make the i30 look more dynamic the A pillars have been moved back and the roof has been given a slight slope with a black spoiler sitting at the end of it. Alloy wheels range from 15″ to 17″ but lower spec models will receive steel wheels. ​​What provides the power?

The new i30 will be available with a choice of three petrol engines and one diesel engine, including Hyundai’s brand new 1.4 T-GDI turbocharged petrol engine. This engine is able to offer 138bhp and can be mated to either a six-speed manual of a seven-speed automatic. Other engines on offer include the 1.0 litre T-GDI  and 1.4 litre MPI petrol engines as well as a 1.6 litre turbocharged diesel unit.

A Korean car made for European roads

As stated before, Hyundai is keen to be the best Korean brand in Europe and to help achieve this the i30 has been developed for European roads. It was even tested at the Nurburgring – yes you read that right! It was also tested in Sweden to ensure it’s able to perform in the extreme cold. That’s not something we’ll need in the UK but it’s nice to know the car is capable of working when the thermometer plummets below zero. ​To give better handling the new i30 has 10% faster steering than its predecessor and the vehicle response is 15 milliseconds faster. The chassis has also been re-worked and the front brakes have been made larger so it ought to be more dynamic than the outgoing i30. Advanced High-Strength Steel means that the body is stronger and lighter – the new i30 is 28kg lighter but offers 22% more rigidity.

Full of tech and safety kit

Buyers of the new i30 can expect plenty of kit for their money – a choice of 5″ or 8″ touchscreens will be available which will offer the standard Bluetooth and smartphone connectivity which is almost essential in today’s cars. Sat nav will also be available when the 8″ touchscreen is deployed whilst the 5″ offers a rear-facing camera. Plenty of safety kit will be on offer as well, including Autonomous Emergency Braking, Smart Cruise Control and Blind Spot Detector. ​​The price has not be confirmed but the current model starts at £12,995 so you can expect it to be around a similar mark. On paper the i30 does look like an attractive prospect but it will have some fierce competition from cars such as the Ford Focus, Vauxhall Astra and the VW Golf.