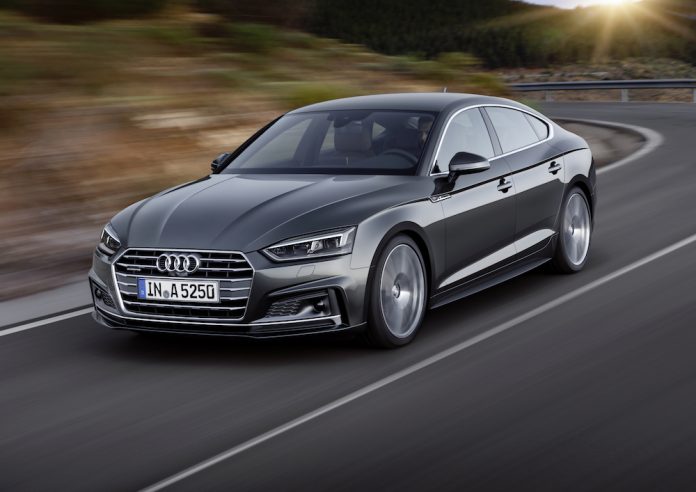 Audi has released further details of its new A5 and S5 Sportback models which will be available to order from the middle of October.

Skip to the good bit

I’ve already covered the A5 Coupe and as the Sportback won’t be a million miles away in terms of difference I’m going to jump straight to the juicy stuff – the S5 Sportback. Like other Audi ‘S’ models the S5 Sportback will feature muscular yet conservative styling and a big engine under the boot. Under the wraparound bonnet lies a V6 engine that’s able to boast an impressive 340bhp and 500Nm of torque.

Audi claim the S5 will reach 62mph in 4.7 seconds and a limited top speed of 155mph. Both the A5 and S5 Sportback feature newly designed suspension but you can expect it to be firmer and sportier in the new S5 for a more engaging drive. A sport differential has also been fitted to offer the best grip when cornering and Audi’s legendary quattro system is also on offer.

Time for the practical stuff

Ok, let’s move on to an area that is less glamorous but just as important (if not, more) – practicality. The new Sportback is bigger on the inside thanks to an increased interior length of 17mm. This means 11mm more shoulder room for those in the front and 24mm legroom for those in the rear. Move further back and you’ll find a boot that offers 480 litres of capacity which can be increased to 1,300 when the 40:20:40 rear seats are folded down. ​​Best of the rest

As with all the other new Audis, the A5 and S5 Sportback feature the new Virtual Cockpit system which uses a 12.3″ screen to display important information to the drive, keeping them one step ahead. That feature is impressive in its own right but the tech doesn’t stop there, Audi’s 8.3″ touchscreen MMI system has a 10gb flash drive, DVD drive, free three years’ Audi Connect services and up to 5 years’ free navigation updates. ​​The A5 Sportback will have a choice of two TFSI petrol and three TDI engines which range from 187bhp to 282bhp. Audi’s quattro system is on offer when a manual gearbox is selected but the all-wheel drive will switch to front-wheel drive to save fuel when appropriate. The new model is 85kg lighter than its predecessor and it’s more efficient – the engines are up to 22% more efficient whilst offering up to 17% more performance.