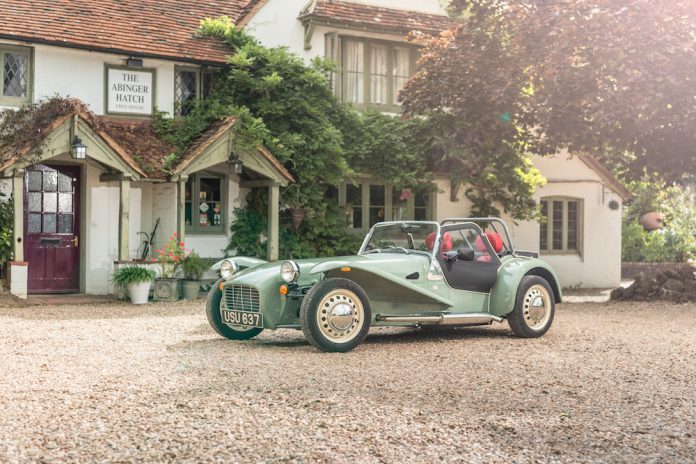 No need to adjust your computer screens, what you’re seeing is indeed a new car, even though it looks like it’s come fresh from the 1960s. There’s a reason for that, it has. Well not literally but the basis of the car comes from the swinging 60s.

Straight from the 60s (sort of)

Caterham seemingly planned this variant of the Seven back in the mid-60s but it never hit showrooms, until now. You only need to look at it and you can tell it’s something a bit special, it has retro hubcaps and a steering wheel that will make you reminiscent of your grandfather’s car.

Obviously it’s up to date with the modern day, so it will have brakes that actually work and and an engine that won’t break down every time it gets a little cold or wet. It’s the same 80bhp Suzuki engine used is the entry level Seven 160. So don’t expect a fast top speed but I suppose that’s not a bad thing as this is all about the ride and handling rather than setting new lap records.

The Seven Sprint will make a fitting debut at this year’s Goodwood Revival event and goes on sale from today at a price of £27,995 which is a fair bit of money if you ask me, especially as you’ll only get 80bhp for your hard earned cash. It’ll be available in six retro colours, Cream, Mellow Yellow, Regency Red, Camberwick Green, British Racing Green and Misty Blue.

That’s not the only thing you’ll get though, the interior and luggage spaces are fully carpeted to give it a 60s style and the whole package just looks superb. It may not have much power but I bet you a pound to a penny it has plenty of charm and character!