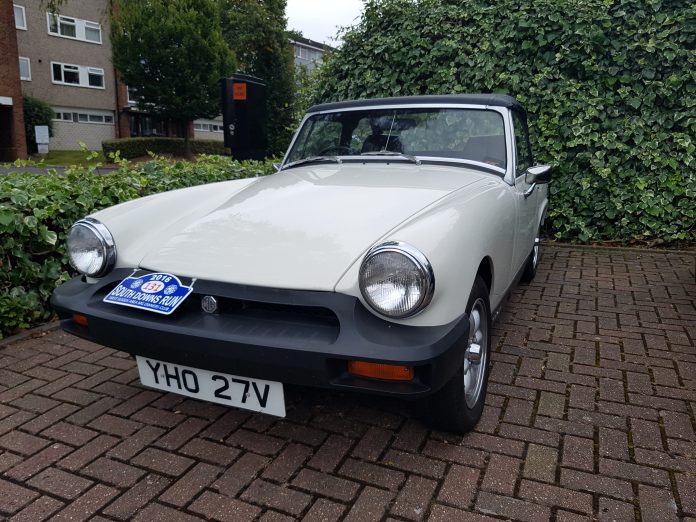 So as you probably have seen, I spent last weekend in the company of a 1979 MG Midget and I thought I’d write a review to give you a taste of what the car is like, which could be very handy if you happen to be interested in buying one.

What can I say? It has a shape designed by an artist’s eye rather than a computer and it looks all the better for it. The long swooping bonnet looks fantastic and I never tired from staring down it when I was driving the car. The interior is adorned with two black leather seats that simply look gorgeous with the contrasting red seatbelts. The alloys may be small but they are most certainly perfectly formed and it’s tough to find an angle where the Midget doesn’t look good. ​​The only design feature I don’t like however, are the black plastic bumpers that cheapens the car somewhat but even they can not make a dent in the charming character this car has. It’s a car that is bound to attract attention anywhere you go and it looks fantastic in cream.

Well this is not one of the Midget’s strongest points, for starters it only two seats and the cabin is ‘cosy’ to say the least. Getting in and out requires a degree of flexibility and you may find you’ll lose your dignity rather quickly. This is made harder with the roof up obviously but even when it’s up you’ll find more headroom than you were expecting. I actually feared I wouldn’t fit but I did and I reckon someone who is 6’4″ could fit in there with no real problems – not unless they’re really fat that is.

The boot is mainly taken up by the spare wheel and it looks small at first glance but I was able to fit an overnight bag, laptop bag, change of shoes, carrier bag full of filming equipment and a  bag full of picnic food with a little bit of space left over. So with that in mind the boot may be practical enough for daily use if you don’t require large luggage capacities. ​​In terms of the comfort the Midget is a car of two halves – the leather seats are very comfortable and I found driving this long distance pleasantly comfortable. However, take the Midget on a motorway at high speed and it’s easy to tell it’s not at home. The wind noise is atrocious and if you take it past 55mph or so and you’ll find yourself shouting to hold a conversation with your passenger.  There is very little you can do to alter the driving position, in fact there is nothing you can do but I found the driving position to be more than adequate.

The Midget is a complete joy to drive, it takes you back to a time where cars were all about the sensation of driving. There are very little creature comforts to be had other than the sumptuous leather seats but the drive alone takes your mind off that. Once I got inside the cabin and got the car going, the first thing that hit me were how heavy the pedals were. It felt like the throttle was stuck and needed a fair bit of pressure to get it to move.

Apply too much though and you end up revving the nuts of the 1.5 litre engine so you need to find the right amount of pressure which takes a little of time (and practice). The steering is also heavy thanks to the lack of power steering but it’s got a lovely weight to it and you’ll get a good level of feedback. The four-speed manual gearbox is also heavy but it’s also very satisfying to use, although getting in to first gear was tricky at times and getting in to reverse was a bit of a challenge at times as well. ​​The 1.5 litre engine produces 65bhp which is by no means fast but because the car is so light it does pull quite well. 0-60 comes in 12.3 seconds and the top speed is 101mph, so this will not bend your face with speed but the car is all about the sensation. This car is for cruising down country lanes rather than out-and-out speed and you certainly get a sense of that with the gearbox that doesn’t like to be rushed.

The car handles well although there is a fair bit of body roll that’s expected from a car of this age but it feels so light and nimble. It feels like the car is pivoting around your hips and I can safely say I’ve never driven a car like this before.

Well this is going to be a quick one… It has an interior light, cassette player, leather seats and that’s about it… Difficult to comment on as funnily enough it doesn’t have a trip computer. The MG Owners Club states that the Midget is capable of getting around 27.9mpg and the fuel tank is about 7 gallons or so. With that in mind if you apply some simple mathematics you’ll find the Midget should get 195 miles from a full tank. I got less than that in practice and I’d say I got about 143 miles, but that is purely an estimation.

Driving the MG Midget was a great experience and I’d love to give it five stars but let’s face it, it’s not the most practical car going. As I mentioned earlier the noise on the motorway can be a real headache – literally – but the car is much more at home on B roads. The sensation of driving this little roadster is truly fantastic and I encourage you try it, and you can, thanks to Danewest Automotive. ​​The Midget offers good performance and it’s a real gem on winding country roads. Every part of the car is a joy to use, from the pedals to the steering wheel. The controls are certainly heavy but you’ll get a high level of satisfaction from operating them.