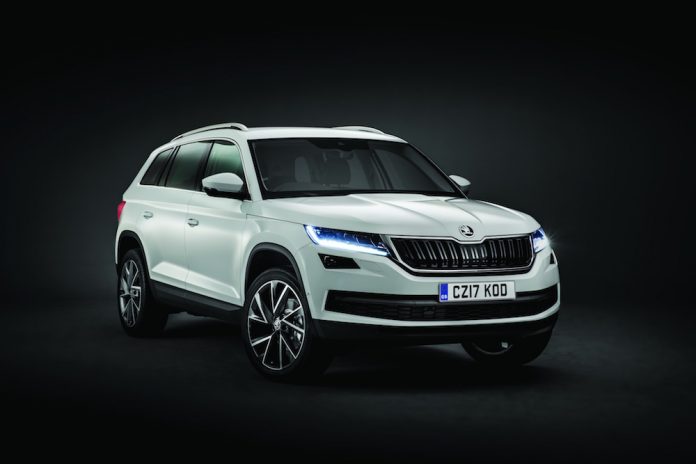 The news of the all-new Skoda Kodiaq has reminded me of canapés at a wedding, you get lots of little bits to munch on – while the drink is flowing – as you wait for the main course. Earlier this week the Czech brand showed us what the inside will look like and today saw the official unveiling  which took place in Berlin this evening.

Getting towards the main course

I’ve written a few articles about the Kodiaq so I’ll do my best not to repeat myself – if you’d like to see the other articles I’ve written about the Kodiaq you can use the Kodiaq tag at the bottom of the article. As I’ve stated before (I know, I’ve already repeated myself) Skoda’s aim with the Kodiaq is “functionality at its most attractive” so the new – and first – SUV from Skoda not only looks good but will be user-friendly as well.

Most of the specification and features have been covered on previous articles so let’s focus on something that has been yet to be discussed – the power. Five engines will be available with the new Kodiaq, two diesels and three petrols. Every engine has stop/start technology as well as brake energy recover to help with fuel consumption. The 2.0 litre TDI engine is offered with two power outputs – 148bhp and 187bhp. The lower powered variant will be able to deliver 56.5mpg and 131g/km of CO2 emissions but if you want the power you’ll be thankful to know the higher powered diesel will get to 62mph in 8.6 seconds. ​On to the petrols now, two 1.4 litre TSI units offering either 123bhp or 148bhp and a 2.0 litre TSI which produces 178bhp. The higher powered 1.4 unit has something called Active Cylinder Technology which shuts down the second and third cylinders to improve efficiency. The base model petrol is able to achieve 47.1mpg and 140g/km of CO2 emissions, so if you the 2.0 TDI is your best for economy.

In regards to gearboxes, the Kodiaq will come with a six-speed manual or an automatic DSG setup which comes in either six speeds or seven speeds. The seven-speed DSG is actually making its debut in the Kodiaq and will be fitted to the most powerful of both the petrol and diesel engines. Four-wheel drive will also be available with most of the engine/gearbox choices as well.