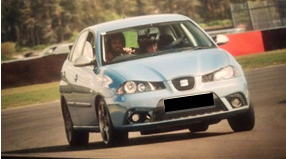 The morning was bright and inviting with a heat already forming. I drove with much excitement for what was in store for me. Not only was it my birthday but I was heading to Snetterton to take part in my first ever track day. I was nervous and I dreaded the thought of holding everyone up or being slow. I had left early in case there were any problems and judging by the queue outside the racetrack I was not the only one. There were a whole host of interesting cars around me to take in. There were a lot of old MGs as they were sharing the track with MSV to put on a session for their owners club. I’m surprised they’d all got there in one piece if I’m honest. Well they must have done as a I didn’t see any men in tweed on the side of the road with their bonnet up.

Other than the MGs there were the obligatory hot hatches, a bright yellow Saab convertible, an Audi estate, an Audi R8 plus others. Oh, and there was a middle ages women in a beige coloured Mini One. No, I kid you not, it was most peculiar. The queue took a long time to move and I started to fear that I would not get in on time. Once I got to the front though it moved pretty seamlessly, I got my wristbands and got my car tested for noise pollution. This was all starting to seem very real now and I was almost giddy with excitement. I got my helmet and made my way to the drivers’ briefing. Because I was so raring to go I already had my helmet on and I couldn’t be bothered to take it off. I soon this realised this made me look like a bit of a tool but I’d committed so I just went with the flow.

The briefing was led by a well mannered chap called Andrew Crighton, it lasted around 20 minutes. It was informative and Andrew made sure the information was delivered efficiently but without boring everyone to tears. Earlier I said this was my first track day which isn’t strictly true, I partook in a supercar trackday a few years ago. This was a gift from my good wife Patsy and this was at Prestwold Hall in Loughborough. On that day I drove an Aston Martin DB9, Audi R8, Porsche 911, Ferrari 360 and Lamborghini Gallardo. I only got 3 laps in each and the track is not the most exciting.

Back to Snetterton, I was now on my way back to the car and getting ready for the first session. We were told that the first session would be at half pace so that we could get used to the track and the warm the cars up. Getting out on the tarmac for the first time was similar to that moment when you’re on a rollercoaster ride that starts it slow descent up. We made our way down Senna Straight into Riches before easing into Montreal. We may have already been getting warmed up but the excitement was already near fever pitch. We did the full circuit for around 4 laps before going back in as we built the pace steadily throughout.

Whilst I was waiting for the second session I suddenly realised I had forgotten to fit my towing eye and hastily set aside fitting it. This was erm, interesting but once I had consulted the owner’s manual I was able to get it attached. In the second session we were left to own devices and we could start to really get a move on. There was a Fiesta ST who was overtaking on the wrong side and generally being a clot but other than that I was very thrilling.

For the Fourth session I had arranged instruction as I know full well I would not be the best driver though and it’s always good to get tips. The instructor I had was named Danny Hartgrove and he sat casually in my passenger seat behind a pair of aviators. He seemed a little disinterested and distant if truth be told but I took everything he had to say. He suggested that I needed to work on my timing for entering a corner.

I got chatting to the bloke who owned the yellow Saab and he we had a decent chat. He said that he was surprised by my car, stating that he had told his other half ‘he’d have me in no time’ yet I can’t remember he passing me. In the same way I couldn’t get past the R8 which as you can imagine was stonking fast on the straights but in the corner the driver was tentative and I was able to keep up (believe it or not!). Word was going about that it belonged to a young guy who had just bought it, hence his apprehension to take it to the limit. Which sort of goes against the point of the car in the first place if you ask me but that is wholly my opinion.

The sessions fell away steadily before we reached the seventh and final session of the day. Mercifully it had got a little cooler as it was hitting around 23-24 degrees at it’s peak. Great for sunbathing but the car starts to feel like a greenhouse when you are honing about. One one of my last laps I was behind an Audi saloon who took Riches a bit too fast and in my stupidity I decided to follow his line. This could have been costly as I took too much speed into the corner and felt the back in start to let go. I held it before giggling like a naughty schoolboy as my wife gurned at me from the passenger seat.

All in all it was one of the best days of my life and I would recommend it to anyone. I think the overall price was around £170-180 which covered the track day, a passenger, 2 helmets and 20 minutes instruction.