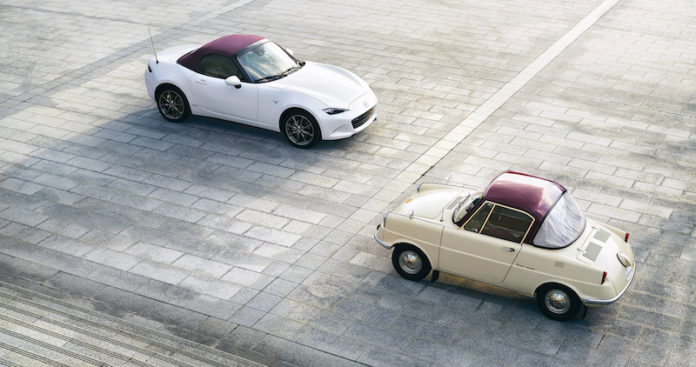 In this testing times, it’s a bit too easy to focus on the doom and gloom, so I’m pleased to tell you that this news article will be COVID-19 free! Japanese car brand Mazda is celebrating its 100th anniversary, and the mark the occasion, some of its UK range will be offered in a special trim level. What was the very first Mazda, I hear you ask. Well, Mazda founded by Jujiro Matsuda, whom at the time, was an apprentice blacksmith. Although we know Mazda for its cars today, the company origins are actually to be found in the manufacture of machinery, which led on to producing three-wheeled trucks.

It wasn’t until the swinging sixties that the world saw the very first Mazda car, which was the R360, produced in 1960. To look at, it looks like a Ford Anglia that was put in the wash at too high a temperature. The reason for its small-but-perfectly-formed construction is because it was a kei car. Kei cars, for those of you not in the know, are small cars with small engines that are built to meet Japanese government regulations. The advantage of these cars is that they are small, so they are ideal for cities, and they cost less to tax an insure. The R360 was powered by 356cc engine, which produced a whopping 16hp along with a tarmac-shredding 22Nm of torque. The top speed? A dizzying 52mph. Ok, I know, not overly impressive, but at least it looks cute.

The UK will receive just 100 anniversary models for each of the CX-30, Mazda3, and of course, the MX-5. Sadly, Mazda are yet to reveal the pricing or indeed the specification on these models, so the Japanese brand is just teasing us at this moment in time. However, what Mazda has stated, is that the special editions will feature white paint along with burgundy interiors along with a health smattering of 100th anniversary badges, which sees the current Mazda logo placed within the original one. Commenting on the 100th Anniversary Special Editions, Mazda UK Managing Director, Jeremy Thomson, said: “ Mazda Corporation has created these special models as a token of appreciation for the customers who have supported Mazda through the years. We’ll be proud to have special versions of the MX-5 Convertible, CX-30 and Mazda3 in our UK showrooms later this year. UK buyers have always loved special edition MX-5s so I’m sure that with its distinctive cherry roof and burgundy interior, the 100th Anniversary Special Edition Convertible will be very popular, while the first opportunity to have distinctive limited-edition versions of our latest cars: the Mazda3 and Mazda CX-30 is equally exciting”. Adding, “Mazda’s have been sold in the UK for over 50 years and today, just as in the past, UK owners love the style, quality and driver involvement of our cars. Since the inception of Mazda UK in 2001 we’ve sold more than 795,000 cars in the UK, so it’s great to be able to celebrate the centenary of Mazda Corporation by offering these special models, at the same time as looking forward to our exciting future, including the launch early in 2021 of our first electric vehicle: the Mazda MX-30.”