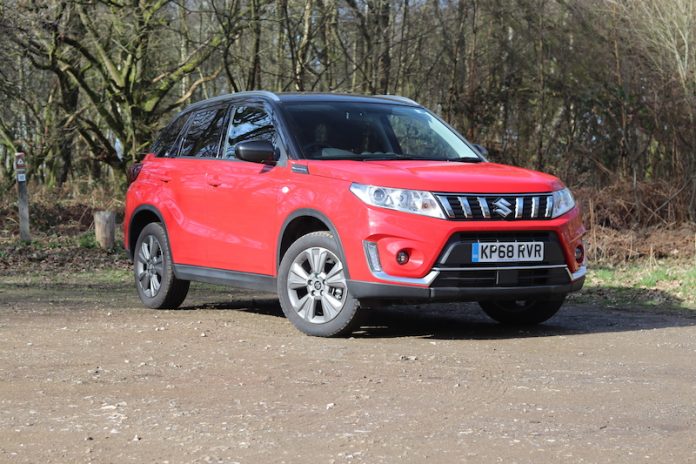 Recently I did a full review with the new 1.4 litre variant of the Suzuki Vitara, and I rather enjoyed it, but what about those of you who want the 1.0 litre? Fear not, as I recently tested the 1.0 litre three-pot as well, but is it enough for the Vitara?

Down on power, but still usable (and fun)

Some of you may remember that I’ve already driven the 1.0 litre Vitara, and to be honest, I wasn’t overly smitten with it. It felt a fair bit slower than the 1.4 litre, but to fair, that was on a rather short drive. Therefore, I was quite keen to see what the car would be like to live with for a week. It’s also worth noting that the 1.0 litre I drove last year was fitted with the 6-speed auto, which I feel holds the engine back a bit. It also delivers 10 less Nm of torque – not that I’d reckon you’d notice that in day-to-day driving. Speaking of power, let’s give you some stats – we all love a stat, don’t we? When mated to a 5-speed manual gearbox, this turbocharged three-cylinder produces 111hp with 170Nm of torque. In this instance, power is mated to the front wheels, but you can choose to have with all wheel drive if you prefer. This front wheel drive variant will hit 62mph in 11.5 seconds and continue to a top speed of 111mph, so it’s not that far behind the 1.4 litre model I tested. Like the 1.4 litre, this engine feels quicker in real world conditions and it feels pretty nippy. Does it feel underpowered? No, not at all, in fact, it can be quite an enjoyable engine to use. It’s flexible, as it can be used for all driving conditions, whether it’s pootling in town or cruising on the motorway. Turbo lag is pretty minimal – less than the 1.4 in my opinion – and the engine feels keen to get going, which will be encouraging. It’s not loud or intrusive either, but you do get a typically three-cylinder thrum as you work through the rev range which I find pleasing. Sadly, the 5-speed manual isn’t quite as pleasing, but it’s not truly unpleasant either. The change isn’t as sweet or as assured as the 6-speed used for the 1.4 litre, but the changes are still precise enough, plus the action is light, making it easy to operate. Just like the 1.4 litre model, the pedals are laid out well, they’re easy to use, and the biting point is easy to find.

It does but not in an overly massive way. The first I noticed, was the lack of weight. This car is around 80kg lighter (about what I weigh) than the 1.4 litre Allgrip variant, and you can feel the difference. Well I can, at least. This car has less than power than that I drove last week, but it’s still fun in the corners, as it weighs less and the body roll is more controlled. There’s not as much grip as the all wheel drive model of course, but there’s still a decent amount of it to be had. It’s also still good fun to chuck about the corners, although the steering complaints mirror that of the 1.4 litre model. However, on the whole, the 1.0 litre still offers a good amount fun. What else is different?

This model is the mid-range SZ-T (1.4 model was range-topping SZ5), meaning you get a different design to the 17″ alloys, but aside from that – and the the LED headlights – the exterior is the same. Inside is where you’ll see the major difference, though, as you lose the panoramic roof, and you also lose the plush leather and suede seats. Mind you, I’ve got no complaints about the fabric seats which have been fitted in their place as they are still comfortable and supportive enough. In regards to equipment, the SZ-T starts from £18,999 and although it’s not as fully loaded as the SZ5, you still get features such as a 7″ touchscreen with Bluetooth, DAB radio, smartphone connectivity and navigation. You also a reversing camera, climate control, and cruise control with speed limiter.

Sadly, the SZ-T – and the SZ4 for that matter – doesn’t have the same level of safety kit as the range-topping model, which may be of disappointment to some buyers, but you still get seven airbags as standard if worst comes to worst. However, if you select an Allgrip variant of the SZ-T, you will re-gain the safety features lost from the SZ5. Is the space any different?

It is, but not in any major ways. Despite losing the all wheel drive system, the boot is exactly the same size, meaning it offers a competitive 375 litres with the 60/40 rear seats up, and 710 with them down. The rear is where you’ll start to see differences, though, mainly due to the omission of the panoramic roof. With it gone, those in the rear will enjoy more headroom, which is nice if you are a taller person like me (I’m 6’2″).

As you would expect, leg and knee room are the same, which is by no means a bad thing as it’s pretty agreeable. The front isn’t a lot different to the SZ5, although the SZ-T doesn’t come with a sunglasses holder, which may irk some. You do, however, gain a small slot where the drive select would normally be for the allgrip system.

It should come as very little surprise that the 2 wheel drive 1.0 litre Vitara is more frugal than the 1.4 litre all wheel drive version. Using the new WLTP method, Suzuki states that this engine should offer 45.9mpg on a combined run, and in my experience I was able to get a maximum of 53.3mpg – not bad going. In regard to emissions, this engine emits 139g/km, meaning for the first year you’ll be required to pay £165. For those of you concerned about insurance, this car has an insurance group of 12E, which is predictably less than its 1.4 litre counterpart. In regards to warranty, the Vitara comes standard with a 3 year warranty, but it’s a Suzuki, so it should be pretty sound in terms of reliability.

If you asked me that question back in November, I would have scoffed and deemed the 1.4 litre as the clear winner, but having spent a week with the 1.0 litre, my thoughts have changed. I’ll be honest, I’d still rather have the 1.4 litre as it’s more fun to use, but the 1.0 litre isn’t too far behind, but it’d be better to have it in the two wheel drive due to the car’s lighter weight, unless you really need to have the all wheel drive of course. The Arona is arguably one of the best small SUVs money can buy right now, however, it’s approach is different to that of the Vitara. It’s more about style and being built for the urban environment, and as such, it has no all wheel drive option. It’s a smarter car, though, plus it’s nicer to drive and offers a bigger boot. Like the Arona, the Peugeot 2008 is more about style and town driving as opposed to getting its tyres dirty on a country green lane. It offers a good amount of tech and there is a better choice of engines. The interior will be a better place to be compared to the Vitrara as well, if such things are of importance to you. As with the Arona and the 2008, the Captur is not available with all wheel drive, as it’s more suited for style and inner city driving. It’s a practical that’s reported to have good levels of refinement, but rear leg room could be an issue for some.