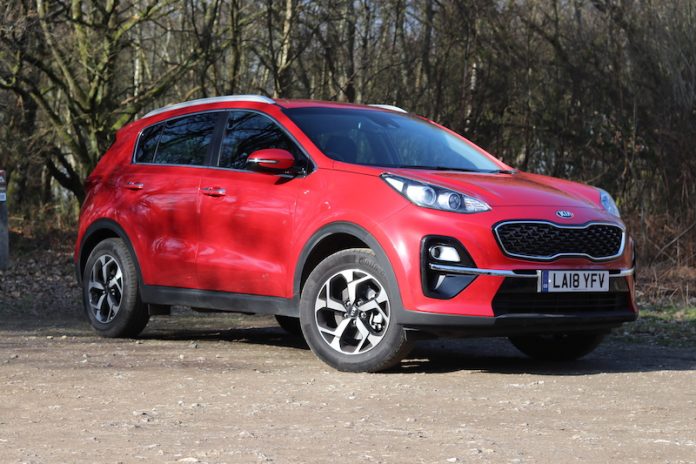 Think of a popular mid-sized SUV and it won’t take you too long to mutter the ‘Q’ word – Qashqai. However, the car I’ve been testing this week is a popular SUV, which isn’t a Nissan Qashqai. It is in fact the latest version of the Kia Sportage, the South Korean brand’s best selling model in Europe. Is it an SUV you should put on your shortlist? Let’s find out.

Let’s start off with the looks; the Sportage hasn’t always been a looker, but this facelifted version looks great to me. Finished in an optional Infra Red paintwork, the new model certainly looks the part and because I’ve got the ‘2’ trim level, I get 17″ alloys as standard. It’s a handsome looking jam jar, and it’s pretty striking, but if you want something more sporty, you can opt for the GT Line or the GT Line S.

Shame the inside is a bit…boring

Sadly, the inside isn’t quite as appealing. There’s nothing desperately wrong with it; there’s a leather steering wheel and gearknob as standard, as well as soft touch materials and a bit of gloss black plastic, but it’s a bit, well, bland. There’s a few too many buttons in here as well, but they all make perfect sense and they don’t feel cheap, although the handbrake does, if you ask me. Plus, I find the armrest gets in the way when you want to operate the handbrake, which is a bit annoying.

On the plus side, you do get some handy touches in the cabin, such as an ignition barrel that has a red ring around it to help you find it in the dark, and a red line on the speedo to visually mark out 30mph. I like little touches like that. Whilst I’m talking about the interior, let me talk about space. Getting a good driving position is easy, as the steering wheel and seat have good adjustment and there is a good amount of room inside.

The doorbins are of a good size, easily big enough for a bottle of drink, plus you get two cupholders in the middle. There’s also a slot where you can put smaller items or some loose change, there’s a cubbyhole in the middle and the glovebox is of a good size. Space in the back is pretty decent as well, even with a driver’s seat set for my 6’2″ frame I had a decent amount of leg and knee room in the rear, plus headroom was of a decent standard as well.

Could you fit three adults in the back? Yes, I think you could, but if you happen to only have two occupants in the back, you can make use of a handy armrest, which also has two cup holders in it. Rear space, then, is pretty good, but what about the boot?

The boot isn’t overly deep, but it’s nice and wide, plus you get a flat loading area. In regards to capacity, the Sportage is able to boast 491 litres, which is more than the Nissan Qashqai and the Renault Kadjar, but not quite as big as the Peugeot 3008 and the Honda CR-V. If you need more space, though, you can fold down the 60/40 rear seats to give you 1,480 litres.

So there’s a good level of space and practicality – what about the drive? This on paper looks to be a bit sluggish, and granted, you’ll need to work it a fair bit to make progress, but it works just fine in and around town. However, you are likely to notice the lack of oomph on faster roads and motorways, and overtakes will need a bit of planning.

If you’re looking for a more eager drive, I’d urge to have a look a the 1.6 petrol with the turbo, or the diesels, of course. In regards to performance, this engine, which is mated to a 6-speed manual and front wheel drive, will hit 60mph in 11.1 seconds and continue to a top speed of 113mph. Speaking of the gearbox, it’s well, ok. It somehow doesn’t feel as slick as the 6-speed I used in the Stonic, as it feels a tad notchy and the changes feel quite hollow. However, the changes don’t feel too long and once you get used to the action, you can shift gear pretty quickly. I’m not a big fan of the clutch though, the pedal feels a bit too high for my liking and the biting point doesn’t seem to have much feedback. What about the steering? It may be direct, but it feels too light for me and I doesn’t really get much heavier with speed. On the plus side, it does make the Sportage easy to manoeuvre. On the whole, the Sportage is an easy car to drive, and to live with, although the ride may not be for everyone.

It’s not particularly harsh or crashy, but it’s fidgety and not often settled. However, it soaks up the majority of harsh bumps well, plus the seats are comfortable. The front seats are heated as well, which is handy for bitterly cold winter mornings.

It’s not bad, in short. Ok, so the steering is about as heavy as a feather and there’s not much feedback, but as I mentioned earlier, it’s pretty direct. There’s not too much body roll as you tackle corners and there’s a decent amount of grip on offer. Would I go so far, to call it fun? Erm, not quite, but if you’re looking to buy a car for fun, it’s unlikely your first stop will be a family SUV anyway. I must say though, for a mid-size SUV it feels quite nimble and agile. I think you could definitely do worse in this part of the market when it comes to handling.

Those of you looking for the most economy will of course want to have a look at the 1.6 diesel, as that offers 47.1mpg on a combined run, but what about this 1.6 litre petrol? On a combined run, it should offer 34.9mpg, but in my experience I’ve been able to get an average of around 40 – not too shabby. In regards to emissions, this engine emits a whopping 183g/km of CO2, meaning the first year cost is £830. Opt for the 1.6 diesel and this falls to £515, but that’s still a fair chunk of cash.

Safety is always likely to be at the forefront of buyer’s minds when it comes to choosing the right SUV. The Sportage does well in this area, as it was awarded five stars from Euro NCAP. Disappointingly, though, you’ll need to get at least the Edition 25 to get autonomous emergency braking, but the model tested here ‘2’ comes standard with lane keep assist, high beam assist, driver attention warning, speed limiter and six airbags.

It’s little wonder that the Sportage has become Kia’s best-selling model in Europe. It’s good-looking, practical, spacious, good value, safe, and of course, you get a seven year warranty. It’s not perfect though; I personally wouldn’t recommend this 1.6 litre petrol, not unless you’re only going to use the Sportage in cities or towns. The ride may not be to everyone’s tastes either, but as I said earlier, it’s far from uncomfortable, and I doubt it’d be a deal-breaker for too many buyers. Would I buy this over a Qashqai? Yes, I think I would, as it offers better value, it’s better looking, a bit more comfortable and you get a longer warranty, so for some, the Sportage may just be a no brainer. One of the clear and obvious rivals for the Sportage is of course, the Nissan Qashqai. Both cars have been very popular in the UK but the Qashai has won the battle in regards to sales. However, it’s boot isn’t as big, the warranty isn’t as long, rear space isn’t as ample and it doesn’t offer as much value. So you could argue that the smart’s money on the Sportage. The 3008 has won bucketloads of awards, including the coveted European Car of the Year award. There’s good reason for this, as the 3008 is a wonderfully stylish car inside and out, plus it’s got a lot kit and tech. It also offers a high amount of space and comfort, but you will need to pay more for the privilege. The CR-V has been around long before SUVs were part of the ‘it crowd’ and in that time it’s built up a loyal following. This is thanks to strong reliability, practicality, safety, comfort and space, leaving little wonder as to why it’s become so popular. It will cost a bit more money, but you get a lot as standard, plus you can have a seven seat option if required. Pity the engine choice is so limited…