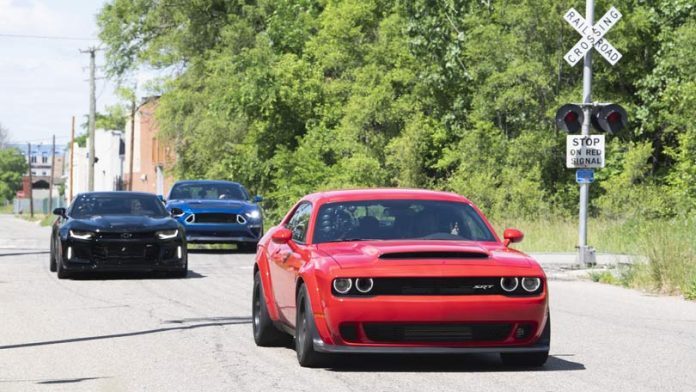 You know what they say, good things come to those who wait. That saying definitely applies to season three of The Grand Tour, which has seemed to have taken age to come back around. The trio are back with a bang though, and the opening montage made it pretty clear that there is plenty to get excited for over the next 13 weeks.

The GT boys kick the season off by visiting a place The Grand Tour has never been to before – Detroit. The opening scenes reveal the remains of what used to be the great ‘Motor City’ before Clarkson chimes in to state that Detroit is a “former shadow of itself”. He’s not wrong there, he then continues by having a small grumpy old man moan about the new urban farms that have been installed – this theme continues throughout the film.

He then states that the place needs to be filled with the rumble of V8s once more before stepping inside a rather tasty – and loud – Ford Mustang. But as you’ll soon discover, this isn’t just any Mustang. After filling the streets with an appropiate amount of smoke we see that the blue Ford is joined by Richard Hammond in the Dodge Challenger Demon, and James May in the sinister looking Chevrolet Camaro ‘The Exorcist’.

At this point, if you a fan of muscle cars, you may need a moment to compose yourself as I imagine the sheer level of excitement has reached fever pitch. In fact, Clarkson states that Richard Hammond had an erection when introducing him to the film. He’s probably not lying, although I’m happy to take his word for it, I don’t need proof.

After getting to know the cars a little better and some typical GT banter, the trio decide it’s about time to do what these cars were made for – drag racing. The three line up at a set of traffic lights, but there is a problem… Hammond soon reveals that he has been told by Dodge that he not to partake in any such activity (Dodge clearly know his track record). Therefore the Hamster has to sit this one out whilst Clarkson and May have all the fun that Detroit’s streets can offer.

After Clarkson had his ass handed to him several times by Captain Slow, the trio decide to find out which is the loudest out of the bunch. To do this, CHM find an old theatre to unless the noise of their thunderous V8s. They all put on a decent effort, even though Hammond forgot the key for his car, meaning it took him more than one attempt to put an effort in. This turned out to be a bit of a waste of time, but I’ll say no more as I don’t want to spoil it for you.

Unlike the God awful Celebrity Brain Crash from season one, which nobody liked, Conversation Street is back for season three. I’ve always been quite fond of Conversation Street as it’s reminiscent of the news feature on Top Gear, which is a feature I also enjoyed. In all honesty, not much was discussed in this installment, and I must admit, I found Clarkson’s gag about cancer to be in poor taste, so this C.S. wasn’t really one to remember. Pity.

With Conversation Street done, it’s time for the next film to be introduced, in which Clarkson drives the new McLaren Senna, a car with looks only a mother could love. I’ll be honest, I was expecting Jezza to really lay in to the styling, but in fact, he barely mentioned it, much to my surprise. What he does mention though is how light the car is and the fact it isn’t a hybrid. In fact the whole piece is delivered with no silliness or elaborate tests, it’s just a petrolhead enjoying a great car at Thruxton, which is apparently the fastest racetrack in Europe – spoiler alert, it isn’t. Dodgy facts aside, the whole film is shot in the slick manner we have become accustomed to, but I loved the fact it was a proper review – no gimmicks. More of this please.

Clarkson was so taken by this car that he said that is was rewriting the supercar rule book, and even went on to say it would be faster around the Eboladrome than the Lamborghini Huracan Performante. He even bet his house on it. Again.

After the Senna was thrashed around the Eboladrome by Abbie Eaton, it was time to rejoin the lads in Detroit with their powerful muscle cars. They set out to make Detroit in a race track, but after finding no joy in the centre of Detroit, they find an old factory to choose as their playground. Hammond is set the task of creating a makeshift course, with May the first to venture out on it, and it’s fair to say he was very complimentative of his colleague’s handiwork.

With that aside, the trio set to work to see who can get the fastest time around the ‘track’ with Clarkson getting a clear lead in the practice. This soon leads James May to take some tactical action to stop Clarkson in his tracks. It was rather cruel, but also pretty entertaining at the same time.

Just when you think the show is about to come to a close, we go to the tent to find out that there is to be one more showdown between the Demon and The Exorcist. The stage is set, the runway is primed with both cars, and the camera is set. Oh hang on a minute… Before a tyre can move an inch, Hammond needs to make some modifications to his Demon.

After what feels like forever and a day, he’s finally ready to get cracking. Who won, though? Well that would be telling, wouldn’t it? Overall, it was a great film, I loved the balance between facts and banter, plus it didn’t feel overly scripted either. I loved the comic book effect transitions as well – really nice touch.

Overall, it was a strong start to the season and unlike some of the other episodes from season one and season 2, this is a proper car show for proper petrolheads. As I said above, the balance of car facts, slick shots, banter and gags was pretty much perfect. The only thing I wasn’t keen on was this week’s Conversation Street, but it’s a pretty small fly in an impressive ointment.