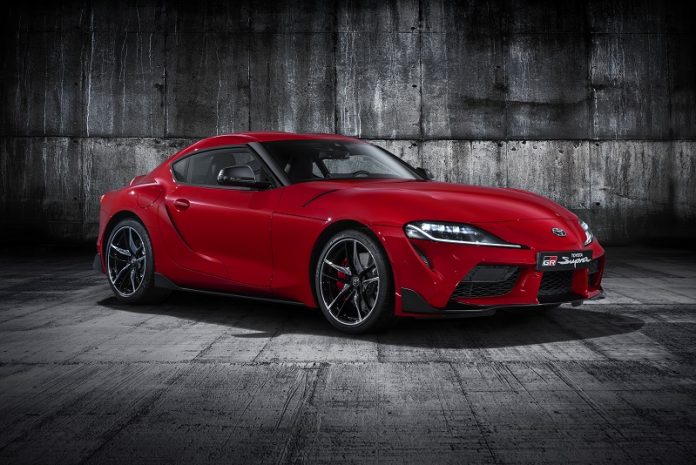 It seems like forever that sports car fans have been waiting for the Supra. In fact, it’s hard to remember a time where a car has been teased to the automotive world for so long before its release. The wait is over, though, as this week saw the unveiling of the brand new Toyota GR Supra, and it’s safe to say, the excitement is palpable. In fact, I think I can hear Toyota fanboys fainting because it has all got too much for them.

That’s one of the taglines used in Toyota’s press blurb, and for good reason. It’s clear that a lot of work has gone in to making this the best sports car the Japanese brand can muster, but let’s face it, they’ve had plenty of time to get it ready. I want to start with a complaint first if I may, though.

The looks. Toyota is banging on about how the fifth generation Supra uses styling cues from previous Toyota sports cars such as the achingly beautiful 2000GT and of course, previous versions of the Supra.

That’s all good and well, but the end result is something that even a mother would struggle to love. I’m sorry Toyota and Toyota fans, but I think the new Supra is ugly. There, I said it. Right, that’s out the way, time to talk about the important stuff, power. Underneath, the long, muscular bonnet lies a 3.0 litre straight six engine lifted from a BMW, which is turbocharged and is good for 340hp along with 500Nm of torque. As you would expect, this power is mated to the rear wheels, but there is no manual version on offer, instead buyers will have to make do with an 8-speed automatic. 0-62 comes in an impressive 4.3 seconds, and it will continue to a limited top speed of 155mph.

It’s not just all about the grunt though, the Toyota Gazoo Racing team has been hard at work to ensure that this will go around corners as well as it goes in a straight line. As you would expect from a car such as this, it has been tested extensively around the famous Nurburgring, and the result is a car 50:50 weight balance along with a short wheelbase and wide tyres, giving the GR Supra a 1.55 “golden ratio”. This basically means it has a great balance of great agility and superior stability, in case you are scratching your head on that one.

Whether you like the exterior or not, it’s clear that is has been designed in such a way that it is sporty and racy. The same goes for the inside, as you’ll find racing-inspired seats and a driver-focused cockpit that has been inspired by the world of single-seater race cars. Fear not, though, there is a passenger seat, so you can take someone along with you for the ride. The GR Supra makes use of a head up display along with an 8.8″ digital driver’s display with a 3D-effect tachometer and shift indicator positioned in the centre; a digital speed read-out is the left and infotainment and navigation information to the right. There’s also an 8.8″ touchscreen as well with all the mod cons you would expect from today’s sports cars.

How much is it? When can I get one?

Prices start from £52,695, and it will be available in two trim levels; Active and Premium. Orders have opened now, and customers can expect their new pride and joy to arrive from summer onwards. Active offers features such as active differential, adaptive variable suspension, 19″ alloys, and a high performance brake package. The Premium trim level adds to this with goodies such as black leather upholstery, 12-speaker JBL sound system, head up display, wireless mobile phone charger and storage and lighting packs. Not enough for you?

If that isn’t enough for you, then you’ll be glad to hear there is also an A90 Edition of the new car, which will only see 90 examples built. Every single one of them will be finished in  a matt Storm Grey finish, along with matt black alloy wheels and a driver’s cockpit upholstered in red leather. In other aspects, its equipment specification will match the Premium grade.

The Toyota GR Supra A90 Edition will be offered exclusively to the very first 90 European customers who placed a pre-order for their car through the country-specific reservation platforms.