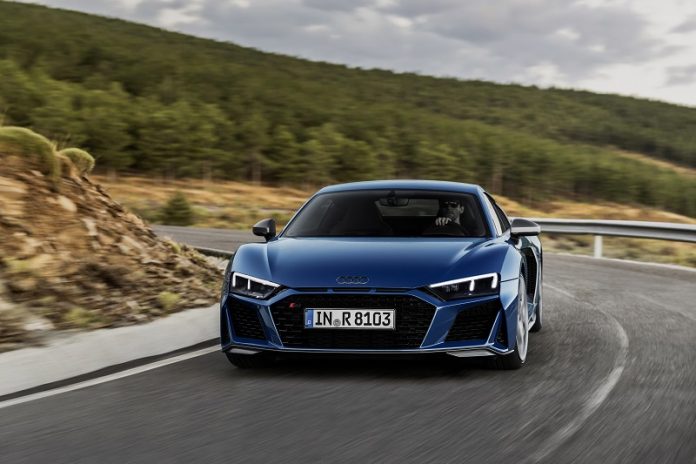 “Born on the track, built for the road”. That’s AudiSport’s motto, and the new R8 certainly looks to own that statement 100%. The German brand has today revealed the facelifted version of the second generation, and my word it looks angry. Some have said it also looks like a Lambo, but let’s gloss over that. Come to think of it, maybe that’s why it’s angry – who knows.

What we do know is that the new R8 offers more power from its 5.2 litre naturally aspirated V10 engine, plus the line up has been tweaked ever so slightly. You still get the standard model of course, which has had its power increased from 540hp and 540Nm to 570hp and 550Nm, but there is now a Performance version replacing the Plus version. Not only is there a new name, but power has also been increase from 620hp and 580Nm from 610hp and 560Nm. Both models are still offered with Audi’s quattro all wheel drive system of course, as well as a 7-speed S Tronic dual clutch automatic gearbox. The standard model offers a top speed of 201mph for the Coupe and 200mph for the Spyder, whilst the Performance is able to better this with 205mph and 204mph for the Coupe and Spyder respectively. If you’re really concerned, the engines are a bit greener to thanks to the fitment of particulate filter to bring down CO2 emissions. What else is new?

It’s not all about power, AudiSport has made tweaks to the R8’s suspension setup as well fine-tuning the steering to ensure it’s more precise. The driving modes have also been revised to help driver’s feel a more distinct difference between them. The standard model gets Comfort, Auto, Dynamic and Individual, whereas the Performance also includes Dry, Wet and Snow.

The electronic stability control has also been enhanced for the Performance model to provide better stopping power, meaning it’ll stop 1.5 metres sooner from 62mph and 5 metres sooner from 124mph. Speaking of brakes, the new R8 comes with steel brakes as standard, but carbon ceramic discs are available as an optional extra. Buyers can also choose from an optional carbon fibre-reinforced polymer (CFRP) and aluminium front anti-roll bar, which helps to save 2kg. “The R8 occupies a unique position for Audi in every respect,” says Michael-Julius Renz, Managing Director of Audi Sport GmbH. “It’s now even more powerful and faster.” adds Oliver Hoffmann, Technical Managing Director of Audi Sport GmbH: “Motorsport is part of our DNA. With around 50 percent shared parts with the R8 LMS GT3, no other automobile is so close to motor racing as the R8.”

The new R8 will gone on sale in the UK early 2019, with prices yet to be announced.